Barber-Scotia College looks to the future 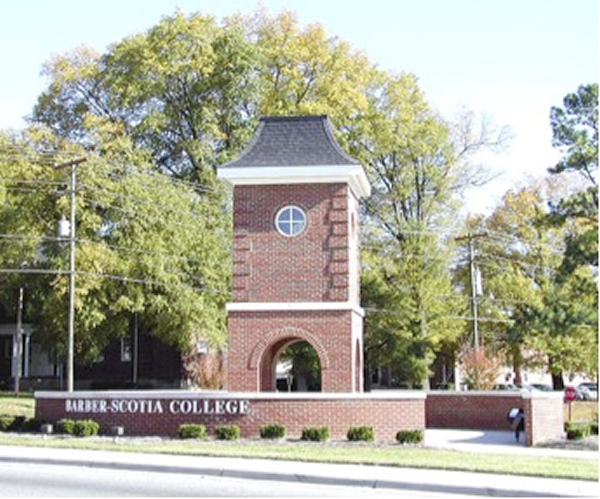 CONCORD — Barber Scotia College, once known as the “Great Institution of Education,” is alive and in good health. After being resuscitated by an affirmative vote of the board of trustees on Aug. 8, faculty and staff, led by Interim President Dr. Yvonne Tracey, welcomed more than 50 students for the 148th school year.

Tracey took the helm after the board of trustees named her interim president when Dr. David Olah resigned as president in May 2015. Before Olah’s seven-year tenure ended, Tracey was vice president of student affairs and supported the position of academic affairs since 2008.

Tasked with revitalizing a college weathered and beaten by the storm, Tracey has embraced the challenge and seems oblivious to the words “interim” and “impossible.”

“That’s because of my faith in God, confidence in my unprecedented ‘We Team,’ and seizing a new paraphrased version of the college’s icon ‘In the beginning, Faith . . . Even now, Courageous Faith,’ ” Tracey stated.

Each group was captivated, educated and re-energized. They were also moved by personal testimonies such as the ones by students Christopher Calvin and Shaquille Wilson, who had attended 13 different schools before he graduated high school. “Barber-Scotia College has given me that security I’ve never had,” Wilson said.

Dean of Students Tony Spates, a former bank financial officer and successful coach from Palm Beach Atlantic University in West Palm Beach, Fla., believed in Barber-Scotia so much that he made the sacrifice and moved to campus with his 10-year old daughter.

“Being in this environment has changed our lives and has opened my daughter’s eyes to the world of educational opportunities for girls,” Spates said. “She has been impacted by the knowledge and wisdom here and has written a student proposal that’s been accepted by Dr. Tracey.” His daughter mirrors his mentorship for students. “My goal is to build up and empower the student body. … We also want the students to have a close family feel towards each other and challenge each other to strive for greatness,” Spates said.

Also among the distinguished “We Team” is Athletic Director Jonathan Sisk, who has tripled students’ academic honors and increased athletic victories in his two-year tenure. He also held the record for being the youngest full-time athletic director in the country when he joined the college at age 28. Sisk recruited Spates to his talented and enthusiastic athletic department.

A few other coaching professionals round out this academic-driven staff. Returning Coach Marcel Webster has built the women’s basketball program from scratch, taking it from a handful of recruits and a practice time slot in Newsom Gymnasium to a respected and comprehensive program. Multiple soccer national championship coach Luis Cortell, who hails from West Virginia Tech, is the latest talent.

“Barber-Scotia College is on the rise, and I believe this community will benefit greatly from our athletics and academics,” Cortell said.

Most people are shocked to learn Barber-Scotia has drawn this caliber of dedicated visionaries on mere stipends, bartering, or volunteer arrangements. They all remain hopeful for a future when financial affairs will improve. One faculty member is the new vice president of Academic Affairs, Dr. Sophia Woodard, an alumna and former instructor whose Aug. 8, presentation to the board of trustees reflected the “We Team’s” united voice.

“In June of 2004, the college experienced a considerable shift regarding its accreditation status; however, as a unified contingency, those who are agents, affiliates, partners and alumni of the college are forging ahead with great diligence to restore Barber-Scotia College’s accreditation. Together with current faculty, staff and students, new alliances are focusing towards a 21st century college dedicated to greater academic excellence and a stronger commitment to the Concord community and beyond,” Woodard stated.

Tracey is a natural fit for current leadership considering her works with Barber-Scotia, Livingstone College and The African Methodist Episcopal Zion church. She is the immediate past president of the AME Zion Connectional Lay Council and was elected by the World Methodist Council meeting in London, England, in 2013 as its chair of the nominating committee for officers to be elected in 2016 in Houston, Texas. These responsibilities, along with civic and corporate positions, have prepared her “for such a time as this” (Esther 4:14b, KJV). She believes God looked down and chose her for Barber-Scotia College.

Often asked about the past adversity and controversy that continues to overshadow the college, Tracey outlines some of the challenges as she remains positive. “Our enrollment is kept to a minimum of no less than 50 students so that we are able to manage the academic preparation and student activities within the budget we’ve developed as basically a tuition-driven budget, since at this time, we are not eligible for Title IV tuition assistance to our students. However, we do provide reductions in tuition to help compensate for the federal government funding we are unable to receive,”  Tracey said.

She further explained that when a college cannot afford to self-fund many of its expenses, activities, or financial needs through endowments, it does create more of a hardship than a Historically Black College or University (HBCU) should have to bear.

Tracey acknowledges the present lack of accreditation limits Barber-Scotia’s status and access to many other programs that require accreditation. While North Carolina’s University System continues to grant authority to award degrees, Barber-Scotia is working towards being a candidacy school with the Southern Association of Colleges and Schools since it is the more accepted realm of higher education. However, not having accreditation has allowed Barber-Scotia’s students to graduate with limited debt; and if they are able to work through each per-semester payment plan negotiated with them, they can actually graduate college debt-free.

Despite bumps and challenges, Tracey feels it is imperative to continue to nurture and develop many more Dr. Mary McLeod Bethunes, as the world cannot afford to lose this significant, historical educational institution.

The question often asked about Barber-Scotia is, “Aren’t ya’ll closed?” Quick to dispel the myths and proud to defend the college,  Tracey emphatically declared that Barber-Scotia has never closed the doors. Many great partners have been instrumental in the college’s success such as pastors Rochelle and James Farewell of Rebuilding the Walls Ministries. This team has led their on-campus church to contribute thousands of dollars to feed, provide scholarships and spiritually support Barber-Scotia’s students.

Barber-Scotia was founded by the Presbyterian Church (USA) and opened its doors in January 1867 as Scotia Seminary, under the leadership of the Rev. Luke Dorland.

For more information contact Karen Soares, vice president of technology and institutional advancement, at 540-207-2349 or KSoares@b-sc.edu.