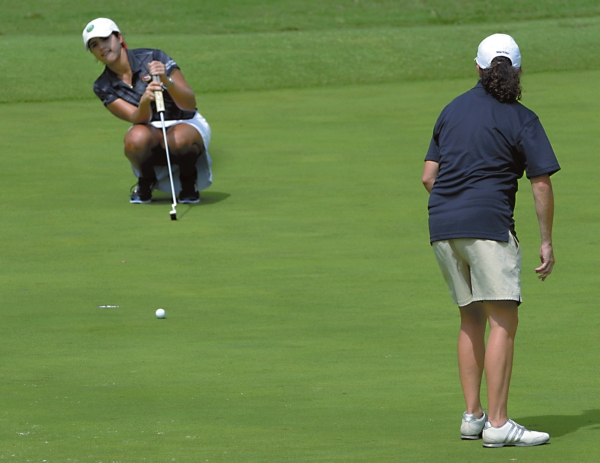 Allison Adams on the right putts on the 6th green in the Women's Championship Flight in the Crowder/Dorsett Labor Day 4-Ball Golf Tournament. Her partner Grace Yatawara tries to help with some body English. photo by Wayne Hinshaw, for the Salisbury Post

There has been a women’s division championship in the annual Crowder/Dorsett Labor Day golf tournament for five years now and the title holders have not changed at all.

Allison Adams and Grace Yatawara won the championship again yesterday at Salisbury Country Club, but not in a way anyone could have foreseen.

Yatawara, 17-year-old Salisbury High School star, and Adams, a teacher and athletic director at Erwin Middle School, had a three-hole lead after nine holes on Monday, but the match ended with the disqualification of their opponents, Kristi Laton and Phyllis Durland.

On the No. 5 fairway, due to some slower play ahead and the green being occupied, Laton took a weighted swing aid out of her bag and took a few swings. That practice is against the rules in tournament golf, and unfortunately, Laton did not know it.

“It’s a learning experience for me,” said Laton. “I didn’t know the rule that you couldn’t have anything weighted in your bag. The girls called me on it and that got us disqualified.”

Country Club golf professional Chad Campbell got word and even though he knew the rule, made some calls to colleagues just to be sure, while play continued. He called the four women in for a conference after they played No. 9 and informed them of the ruling.

“I appreciate the way Chad handled it, calling three other rules interpreters and sure enough, in match play, it’s disqualification,” added Laton. “We were down three, so we had our work cut out for us anyway on the back nine, but we were playing pretty good.”

Laton and Durland shot a 72 during qualifying, good enough for the second seed in the tournament. Adams and Yatawara, as defending champs, didn’t have to qualify. Some thought that an upset may be in the cards on Monday, as Adams is five months pregnant and not at the top of her game.

But Adams and Yatawara were playing better than they did on Sunday when Mechelle Kuld and Sharon Miller took the champs to the final hole in the semifinal match.

“I hit the ball a lot better today and Grace was much better today, too,” said Adams. “We wanted to be at least two up when we made the turn and we were, but then it was over.”

Adams said that she would have preferred to have won the traditional way but rules are rules.

“It still feels good to win and I’m glad that we were three up when the decision was made, rather than being down or all square,” said Adams. “I knew that you couldn’t use a training aid in competition, but I wasn’t really sure of the rule in 4-ball match play.”

The match was tight early and all even until Yatawara birdied No. 7, had a par on the next hole and then Adams parred No. 9. Yatawara had also hit it stiff on No. 9 and would have had a short birdie putt. But bogeys from Laton and Durland closed out the hole and ultimately, the match.

“I didn’t want to win that way … you always want to win it on the course,” said Yatawara, who’ll be an early signee with East Carolina in November. “I was playing so much better today because I got a little help on the range this morning from Ryan Szalay (club employee and Catawba golfer). He reminded me of some things and I was striking it much better than yesterday and my driver was a lot straighter.”

Adams and Yatawara set a Labor Day tournament record that may stand a long time. No team has stayed together and won five consecutive championships, breaking the mark of four straight wins on the men’s side. Richard Rendleman and John Isenhour Jr. won the men’s title in 1962-65. Individually, Isenhour was actually part of seven straight titles, also winning with A.D. Dorsett in 1966-68.

“It’s just tough going up against Yatawara, she’s just an awesome golfer,” added Laton. “But we’ll come back next year and try to do it again — without a weighted tool. We’ll go at it again.”

Carson (1-0) and Salisbury (1-1) will make up their football game that was postponed on Friday by weather issues tonight... read more