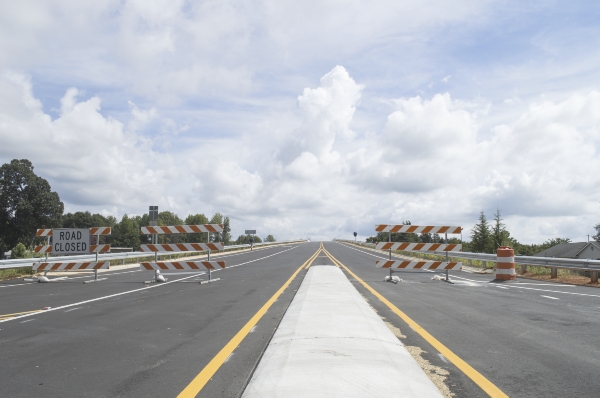 Clouds hover over a bridge that crosses U.S. Highway 29 near the southern tip of Salisbury's city limits. The bridge is intended to separate cars from railroad crossings and prevent train accidents. Josh Bergeron/Salisbury Post A commute to the eastern side of U.S. 29 near Peeler Road will change significantly starting Monday.

The bridge over U.S. 29 connecting to Cedar Springs Road will open Sept. 14. On the same day, the existing Peeler Road will be closed permanently. As a result, the bridge would be the only way for motorists to cross U.S. 29 in the vicinity. Previously, several at-grade crossings allowed motorists to freely travel onto U.S. 29.

The intent of the U.S. 29 bridge is to separate cars from railroad tracks and prevent collisions, according to the Department of Transportation’s project plans.

Seitz said both routes would be operational until 8:30 a.m. on Sept. 14. Then, Peeler Road would be permanently closed.

The bridge would serve as the only way for motorists to cross U.S. 29 for either the Peeler Road or Peach Orchard Road Interstate 85 exits. Motorists exiting I-85 and traveling toward U.S. 29 would have to take the same route.

The project officially started in 2013, according to DOT. Its total construction cost is estimated to be more than $9 million.

The U.S. 29 bridge is one of several ongoing DOT projects in Rowan that have changed typical commutes for motorists.

A project at Klumac Road is similar to the U.S. 29 bridge. It also aims to separate the road from railroad tracks and prevent collisions, according to project plans. The Klumac Road project would build a railroad bridge over a new portion of Klumac Road near Mooresville Road and U.S. 29.

A number of other railroad crossing have closed or will close as part of a much larger project called the Piedmont Improvement Plan. Salisbury to Kannapolis improvements include constructing about 11 miles of railroad tracks in Rowan County. The total estimated cost of the project is $60.8 million. The estimated completion date is sometime in spring 2017, according to DOT estimates.

By Dennis Davidson dennis.davidson@salisburypost.com After a long, tiring day of grueling competition, teammates Andrew Morgan and Phil Miller each had... read more