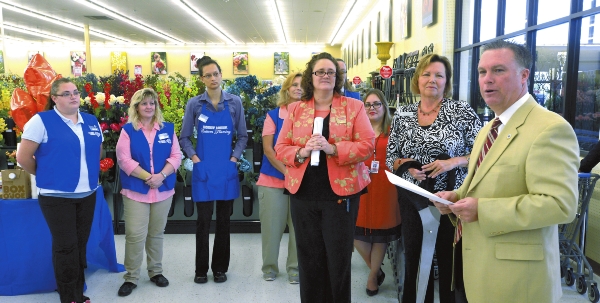 At the grand opening of Hobby Lobby on Monday, store manager Shannon Rizzo, center, Elaine Spalding, president of the Rowan County Chamber of Commerce, and Greg Edds, chairman of the Rowan County Board of Commissioners, welcome shoppers. Wayne Hinshaw/For the Salisbury Post

Hobby Lobby first to open at Shoppes at Summit Tori Smith and her mother Debbie Smith shop for signs to decorate Tori’s room at the grand opening Monday of Hobby Lobby. Tori lives in Mount Pleasant, and her mother lives in China Grove. Wayne Hinshaw/For the Salisbury Post

The Shoppes at Summit Park off of Julian Road is now up and running with the official grand opening of Hobby Lobby on Monday. Approximately 75 people arrived for the ribbon cutting ceremony at 9 a.m., with more coming in the doors throughout the morning.

The store opened with a word of prayer before shoppers went in to admire the carefully crafted displays and browse the arts and crafts, home decor, fabric selections, and seasonal items that Hobby Lobby offers.

The Salisbury store is the newest in a chain of more than 600 Hobby Lobby locations nationwide and is the first store to open in the Shoppes at Summit center, which will also include a Dick’s Sporting Goods, a Kirklands, a Five Below and a Mattress Firm.

The Hobby Lobby is currently staffed by approximately 40 local hires and will be looking to hire more employees for the holidays, Rowan County Chamber of Commerce President Elaine Spalding said. The store was set up and decorated by the new hires, and the opportunity was used as a training experience. And the Rowan County community has been extremely welcoming to the new business, Store Manager Shannon Rizzo said.

“This is a huge boost to the Rowan County economy,” Rowan County Board of Commissioners Chairman Greg Edds said.

Edds says that the Shoppes at Summit is projected to bring in hundreds of new jobs by the time it is completed, and that the shopping center will “plug up” retail leakage in Rowan County. Currently, Salisbury natives spend about $271 million per year shopping outside of Rowan County, Edds says—money that the Chamber of Commerce is looking to redirect.

“It’s dollars that will now be spent in Rowan County rather than somewhere else,” Edds said.

And it’s a strategy that seems to be working. Salisbury resident Brenda Bledsoe says she hasn’t been able to find the sewing supplies she needs locally and often purchases them while she’s on vacation in North Myrtle Beach. She’s looking forward to being able to find what she needs closer to home, and says she’ll probably be a frequent visitor.

Jake and Josh Rutzlar, 13 and 10, live nearby and have been watching the store go up with their grandmother, Suzanne Newmark. Since the store has crafts and toys for kids, as well as tools for science projects, they say they’ll be visiting often.

Spalding says that the new Hobby Lobby location has joined the Chamber of Commerce and has committed to giving to local charities.

“We’re so, so proud to have them in the community,” Spalding said.

Crowds of boaters took to the water for some late-summer fun and relaxation at High Rock Lake during a long... read more