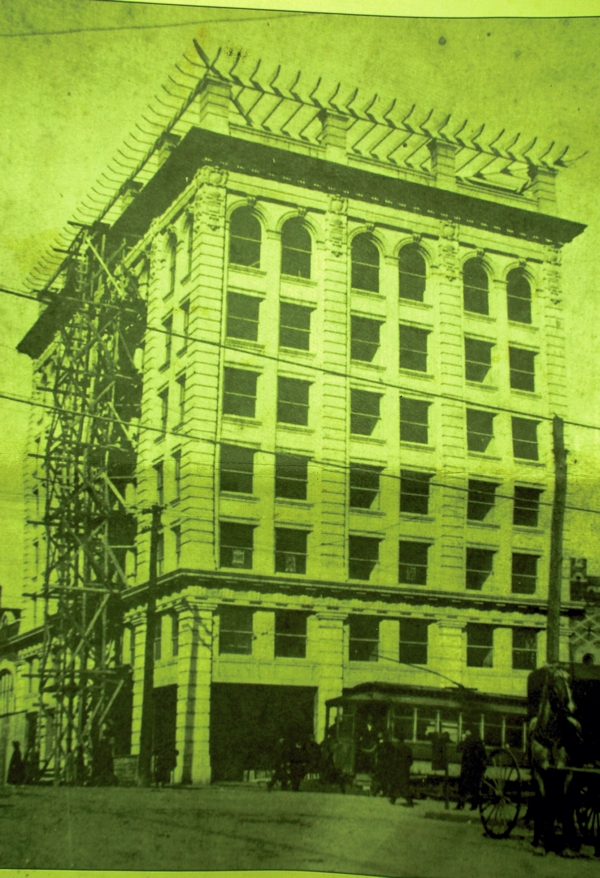 Construction on The Plaza, the tall, city-owned building on the Square in Salisbury, started in 1909 and was completed in 1911, probably when this photograph was taken. Its original name was the Grubb Building, named for its owner, Clay Grubb. ‘Architect Frank Milburn designed four of the most impressive buildings in Salisbury in the early 20th century, including a second Renaissance Revival skyscraper at the corner of Main and Innes streets,’ Davyd Foard Hood wrote in ‘The Architecture of Rowan County.’ At its time, no building in either Winston-Salem or Charlotte was taller, according to newspaper reports. This photograph shows the seven-story building during one of its later stages of construction. Grubb was killed by his wife, Emma, in 1913. At his death, Grubb still owed $122,500 as an unpaid balance on the building. It was put up for auction, and the Wallace family purchased the skyscraper for $115,000 in 1914, and for much of the rest of the 20th century, Salisburians referred to it as the Wallace Building. Ralph and Anne Ketner eventually bought the building from the city, which had purchased it in 1989. The Ketners paid for its total renovation and contributed it back to the city. The Plaza now has a mix of offices and residences. Jimmie Higgins provided this particular photograph of The Plaza, which appeared in a 1994 calendar put out by F&M Bank and Historic Salisbury Foundation.