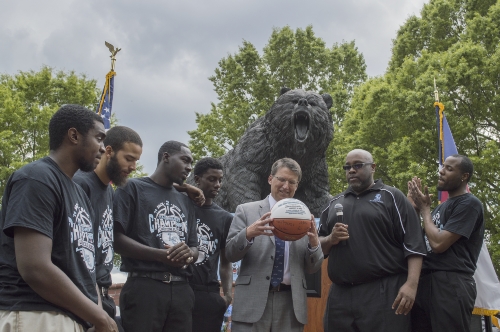 Gov. Pat McCrory received a basketball signed by all Livingstone College players at an event earlier this year. During his visit, he congratulated the men's basketball team on winning the CIAA championship. He also visited the N.C. Transportation Museum. RALEIGH – The most entertaining interview I’ve heard with Gov. Pat McCrory had nothing to do with state politics – or very little at least.

It was mainly about barbecue and football. And it was bizarre, but rather funny at times. And refreshing, but bizarre still.

McCrory came off as a regular guy. Not the one who battles endlessly with the General Assembly over infrastructure bonds and historic preservation and economic incentives and personalities.

The interview with Adam Gold and Joe Ovies of 99.9 The Fan in Raleigh began with one of the hosts asking McCrory how much North Carolina barbecue and which type — eastern or western — he’d send to South Carolina if UNC lost.

“I knew jerks like you would ask me that question,” McCrory said chuckling. “You’re putting me on the spot now, buddy.”

The governor said he wouldn’t be pulled down into a debate over which N.C. barbecue is better — the vinegar-based eastern variety or the tomato-based western type. “Politicians lose gubernatorial campaigns on that type of issue. You know what I do. I mix the two together. That’s what I do,” he said. He likely referred to 1984 gubernatorial candidate Rufus Edmisten, who made a derogatory comment about barbecue because he’d eaten so much of it on the campaign trail and then lost a fairly close race to Gov. Jim Martin.

Edmisten, a Raleigh attorney, said McCrory was wise to ask North Carolinians in an online survey which type of barbecue should be sent to Haley, rather than choose himself.

Then McCrory bashed South Carolina. He said he saw Haley going to a concert in Charlotte a couple of months ago. “She had to come to Charlotte to have fun,” he said. “What’s there to do in South Carolina?”

He also talked about the football game. He mentioned South Carolina’s quarterback, Connor Mitch, who is from Raleigh. “The only chance they’re going to win is to have a Raleigh quarterback,” McCrory said.

When he was done with South Carolina, the Republican got into state politics for a second.

“This is my problem as governor. I trash talk like this to the legislature,” he said. “That’s why they’re still in session.”

So we’ve seen the emotional McCrory, like when he shed tears as former Health and Human Secretary Secretary Aldona Wos resigned her position this year. Now we’ve seen McCrory’s goofier side.

What McCrory will we see next? Maybe a sports radio host?

By Larry Efird Special to the Salisbury Post I was an elementary school principal at a private school for eight years.... read more