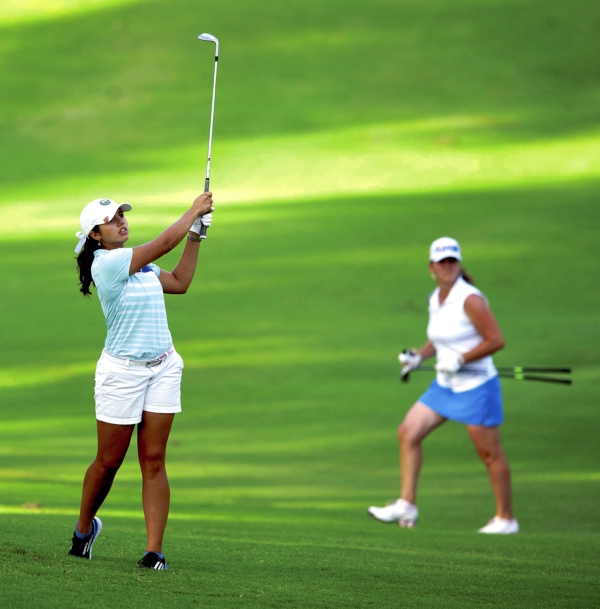 JON C. LAKEY / SALISBURY POST Grace Yatawara hits her second shot on the 18th fairway. The Sunday action of the 2015 Crowder Dorsett Memorial tournament is in the books. Golfers will return today for the final day of the tournament.

As is usually the case at the Crowder/Dorsett Labor Day 4-Ball golf tournament, there was plenty of drama on Sunday afternoon during the second round of play.

Several matches in the men’s championship flight came down to the 18th hole and one was settled in 19. Throw in a women’s division semifinal where the defending champions, Allison Adams and Grace Yatawara, won on the last hole, and you had another classic day at Salisbury Country Club.

The 16 men’s teams in the championship flight are down to four and the semifinals were scheduled to begin at 8 a.m. this morning. Chris Williams and Michael Swaringen will play Phil Miller and Andrew Morgan in one semifinal, while Derek Lipe and Drue Davis will take on Dwayne McIntyre and Brad Vinson in the other.

The two morning winners will battle for the 62nd annual championship today at 1 o’clock.

The women’s division is just in its fifth year and Adams and Yatawara have won the previous four titles. Their dominance was in question yesterday but they had an excuse — Adams is five months pregnant and hasn’t played a lot of golf this year. They defeated Sharon Miller and Mechelle Kuld, 1-up.

“That was tough,” sighed Adams, afterwards. “That’s the first time playing pregnant and out of golf shape. I’ve played twice since last Labor Day.  Our goal was to never go down during the match and we didn’t but it wasn’t easy because Sharon and Mechelle played so well. They always play us tough in this tournament.”

The two teams went to the par-3 17th hole all even and Kuld stuck her tee shot to within a foot, giving the No. 5 seed a great chance at leaving the hole with the lead. However, Yatawara’s tee shot landed eight feet from the hole and the Salisbury High senior calmly sank a birdie putt before Kuld tapped in for the same.

“I didn’t really know how close she was there, but I already had in my mind that we needed a birdie to at least tie them,” said Yatawara. “I just trusted my swing and hit it up there pretty close.”

Kuld later said that it was disappointing to leave the 17th still tied. “Yes, it would have been to nice to have gone up right there, but I wasn’t surprised that she made her putt,” Kuld said. “She had been putting great all day. She’s a great player.”

On the par-4 18th hole, Kuld and Yatawara had solid tee shots but by her own admission, Kuld “chunked” her second shot. Yatawara parred the hole and when Miller’s 14-foot par putt slid by, the top seed had prevailed.

“I’m very proud of the way played together … we did great,” said Miller, after another tough loss to Adams and Yatawara. “I thought that we could get ’em today. We sure were trying.”

Due to her pregnancy, Adams had severe back problems last week and could not have attempted golf. “I got some medicine and I’m 95 percent better than last week,” said Adams, wife of professional golfer Frank Adams. “I could barely bend over enough to tie my shoes. There’s no way I could have played had this tournament been last week.”

Adams and Yatawara will try to win their fifth consecutive Labor Day title today against the team of Kristi Laton and Phyllis Durland, 6-and-5 winners over Susan Morris and Faye Cline. Laton and Durland were the qualifying medalists with a 72 and may actually be the favorites today.

In the men’s action, Miller and Morgan had the most decisive win, topping Ryan Honeycutt and Keith Dorsett, 3-and-2. They actually led by four holes after the 14th, but Dorsett birdied the par-5 15th to keep the match going.

“We birdied the first hole, and that sort of relaxed us, even though we had the rest of the match in front us,” said Miller, who won the 2009 championship with Jim Christy. “We just felt comfortable all day.”

The match was all square after five holes but Miller had back-to-back birdies on holes 7 and 8. His birdie on No. 8 was from about 30 feet. “I probably had no business making that one but some days those go in,” said Miller.

Miller and Morgan were up 3 after the 10th hole and picked up another hole on No. 12.

Williams and Swaringen, seeded ninth, won 1-up, over the father-son team of Glenn and Roy Dixon. The Dixons, the No. 16 seed in the championship flight, had knocked off defending champs Charlie Graeber and Michael Childress on Saturday.

Glenn Dixon almost evened the match on the 17th hole with a near-birdie out of a green-side bunker but had to settle for a par. On the 18th hole, after a par for Williams and Swaringen, Roy Dixon’s 20-foot birdie putt burned the right edge, ending the match.

“Our opponent had such a great start, it felt like we were fighting up hill all day,” said Lyerly, a junior at East Rowan who won the state 3A title in May and the Rowan Amateur in July.

The tightest quarterfinal of the day was the Davis-Lipe victory over Richard Cobb and Robert Jordan in 19 holes. Cobb and Jordan had battled back from three holes down with three to go. Cobb birdied No. 16 and Jordan had pars on the two closing holes to force the extra hole.

Lipe birdied No. 1 in the first extra hole to close out the match. He said that he stayed positive, even though the big lead had evaporated down the stretch.

“I didn’t feel that down about losing the lead, because Cobb and Jordan did what they had to do to extend it,” said Lipe, who was also a semifinalist in the Rowan Amateur this year. “I just told myself to ‘go play the next hole.'”

That’s just what Lipe did. In fact, all four players had birdie putts on No. 1 in the extra hole. But Lipe had basically a tap-in one-footer to secure the victory.

In the senior division, John Henderlite and John Kyger will battle Randy Davis and Jim Wyatt for the championship at noon today.

In the super senior division, the team of David Roueche and Steve Vail will take on Bob Mangum and Russ Priddy for the title, starting at 12:10 p.m.

There are also championship matches in flights 1-10. See Scoreboard on page 2B for the complete list.

By Marny Hendrick sports@salisburypost.com SALISBURY — To the casual observer, a quick glance at the pairing sheets after the first... read more