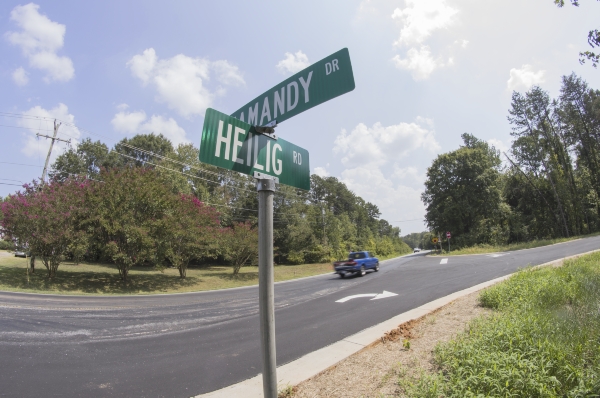 Josh Bergeron / Salisbury Post - Cars drive past a road that was created as a rear entrance to Gildan's plant on Heilig Road. Besides being an access point for Gildan workers, it's also the focal point of a new industrial park.

GRANITE QUARRY — As politicians look to boost the local economy, the western edge of a Rowan County town may contain a concentrated potential for growth.

Granite Quarry is the home of Rowan’s newest industrial park. The park sits at the edge of the town’s western limits, near Heilig road and Faith Road. Developers have also planned to build several hundred more houses in surrounding areas.

The town’s board approved plans for a neighborhood of more than 400 houses in the late 2000s, said Granite Quarry Mayor Bill Feather. Feather said the 400 or so houses would be in addition to The Gables at Kepley Farm, which also has expansion plans and is technically part of the City of Salisbury. The industrial park, however, is the newest addition to the area’s potential. Its total acreage is about 90 acres, with close to 80 acres of developable land. It’s a direct result of an access road built for Gildan’s plant on Heilig Road.

“It’s something that several different parties have been working on for a long time,” Feather said. “Sometimes projects don’t get a lot of attention and people looking at you until you get further along. And, now I think everything is finally coming to fruition.”

Land inside of the industrial park belongs the Rowan County. The land became part of Granite Quarry as part of a voluntary annexation agreed to by Rowan County Commissioners.

Charmandy Drive — the name of the new access road — sits just east of Gildan’s main entrance. It gently winds to the Gildan plant’s rear entrance. The road was part of a larger project that also included extending water and sewer lines to Gildan and electrical work. All of the work was funded through about $2.5 million in total grant funds from a number of sources. Rowan Works Economic Development Director Robert Van Geons said the access road construction represents about $1 million of the total grant funds.

Although the main purpose of the $2.5 million project was to build Charmandy Drive, the industrial park wasn’t an accident, according Van Geons.

“Anytime we have a grant, we try to base it on a project to support an industrial facility and do it in such a way that it builds capacity for additional economic development,” he said.

The Granite Quarry industrial park, however, would have the largest lots of “fully ready” land — already outfitted with utilities  —  of any location in Rowan once finished. Gildan’s facility required a large water line. As a result, Van Geons said the water and sewer capacity will suit nearly any prospect.

“It’s designed to be large enough for multiple industrial users,” he said. “For the size of the tracts, it’s hard to fathom a user that would be too large.”

He estimates the Granite Quarry industrial park could be split up into four total lots. One is a 14-acre lot created by natural features, he said.

County government has taken on the responsibility of recruiting potential business to the industrial park. Earlier this year, county commissioners hired Triad Commercial Properties to recruit developers that would build speculative buildings on county property. Commissioners Chairman Greg Edds said the firm has specifically focused its efforts on the Granite Quarry industrial park.

Edds said he and Vice Chairman Jim Greene met with Triad Commercial this week to get an update on the project.

Edds said Triad Commercial has contacted 15 commercial developers to gauge interest in building at the Granite Quarry industrial park. Once speculatory buildings are finished, Edds said the firm would contact various companies to make a move to Rowan.

Van Geons said Gildan is aware of the potential for economic development on Charmandy Drive. He said the road would be able to handle Gildan’s regular traffic and anything additional.