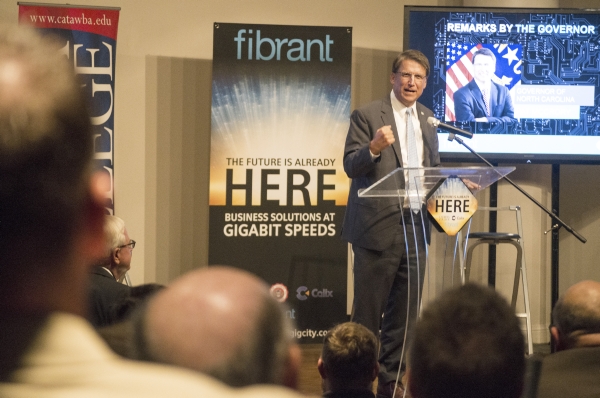 Salisbury created a lot of positive buzz Thursday when it announced that Fibrant, the city’s homegrown fiber optic network, can offer speeds up to 10 gigabit-per-second.

Wired magazine, one of the nation’s leading chroniclers of emerging technologies, posted a story headlined “The First US City with 10GB Internet is … Salisbury.”

Salisbury has been struggling to make its fiber-to-the-home network reach the potential envisioned at the network’s launch in 2009. Fibrant has 3,300 subscribers; the city hoped for 4,500 by now. The Fibrant debt has caused the city’s bond rating to be downgraded. But when it comes to speed, the network has been a blazing success.

Last year, as cities like Charlotte and Raleigh jockeyed for a chance to get Google Fiber and its 1G service — a speed Salisbury already offers  — council members vowed to do a better job of marketing this gem of a system. At the same time, the new Fibrant director, Kent Winrich, went for greater speeds as he replaced old equipment. Mayor Pro Tem Maggie Blackwell has been particularly adamant about spreading the word. “We have got to get rolling,” she said at the council’s February retreat.

Thursday, they rolled. From a marketing standpoint, the 10G declaration was effective. Very few customers would need that kind of bandwidth; so far the city has only a handful who use 1G service. But shooting for the 10G stars shows the city is looking forward and thinking big. As Wired quoted journalist Andrew Blum, an expert on the subject, “I think anything beyond 100 MB can be understood as a publicity stunt — and a good one!”

One of the themes emerging in all the coverage is the existing providers’ reluctance to extend high-speed services to small towns like Salisbury — and in some cases to upgrade at all. Again from Wired:

“Salisbury’s new service shows how city governments are leading the way when it comes to high-speed Internet connections. And ultra-high-speed connectivity could help accelerate the adoption of single gigabit connections, pushing the rest of the industry into the modern era…”

Mayor Paul Woodson said Salisbury wanted to differentiate itself. The headlines suggest the city succeeded. Whether this will sway high-tech firms to call Salisbury home is yet to be seen. Before Thursday, though, few people outside Salisbury knew the city had a broadband network, much less how fast it could go. Now they know.