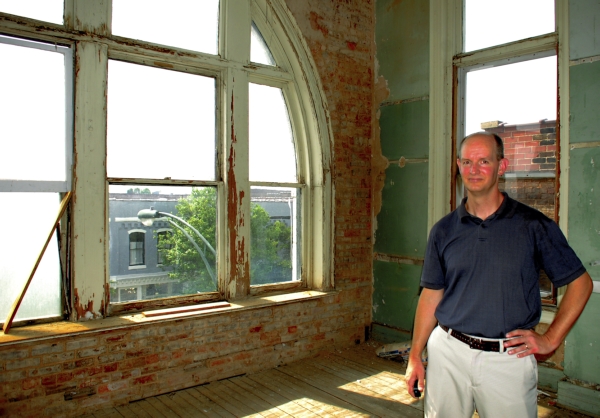 Client-minded architect Pete Bogle now has his own firm

SALISBURY — This past week, when architect Pete Bogle started moving into his one-room office at the Plaza, the first things he placed on his desk were his business cards next to a toy replica of a John Deere tractor.

The tractor was to remind him of days on his grandparents’ farm off Sherrills Ford Road. It was a great place for a kid and his friends but seems far removed from this third-story office on the Square, just down from his newest project, the Washington Building at 118 N. Main St.

KMD Construction has asked Bogle to provide the designs that lead to a restaurant at street level, offices on the second floor and five new apartments on the third floor.

Bogle is a big proponent of downtown building renovations that help the central business district become a hub for activity — not just for business and not just for residences, but a mixture of both.

The first- and second-floor renovations will be straightforward because the Washington Building once had the Ethos restaurant on the first floor, as well as Miller Davis Studios on the second.

The residences all will require new heating and air-conditioning, wiring and plumbing, A big project addition will be an elevator in the back of the building.

An old elevator shaft already exists, but it’s not the right size for modern codes and needs.

As with many older buildings, the natural light pouring into the upper rooms is substantial, thanks to windows any architect can appreciate.

Bogle, 41, started his own business, The Bogle Architecture Firm, in August. As an architect, he has 18 years experience, not counting the 13 months he served as the code enforcement director in Rowan County.

The timing was right, Bogle says, for having his own business, and every day seems filled with new possibilities and challenges.

“It gives you purpose,” he says.

Bogle can’t say enough good things about the Ramsay, Burgin and Smith architectural firm, the place he returned to after his stint as code enforcement director ended in January 2014.

“A great family of folks,” Bogle says of his old employer.

Former City Councilman Bill Burgin is a principal in that firm, and Bogle says Burgin has been “incredibly supportive” and understands why this was a good time for Bogle to go out on his own.

Bogle sees the economy improving. He is working on a home renovation on N.C. 150, a design for a new Tru-Value hardware store in the Ketner Center and a project for a trucking company in Cleveland. In the past with his previous firm, Bogle worked with many churches — “projects with meaning,” he says — and also with several non-profit organizations.

“I’m all over the place,” Bogle says. “I don’t want to be pigeon-holed into one thing.”

One of his last big jobs with Ramsay, Burgin and Smith was the new Rowan Helping Ministries building, handling the sustainable design aspects of that project. It was a case in which energy efficiency combined with institutional longevity of materials and finishes.

Add in the mission of Rowan Helping Ministries, and “it’s going to be hard to beat this one for what I love doing most,” Bogle says.

Bogle also played a significant role in the design of the Family Life Center for Mount Zion United Church of Christ in China Grove.

When discussions first started with the church, Bogle didn’t have any children. By the time it broke ground, his daughters were 7 and 4.

“This was an example of patiently working with a church that wanted to do the right thing at the right time,” Bogle says. “We designed at least three full schematics for them. They wanted to do it, but it was a big cost, so they struggled getting the congregational support.”

When bid prices started dramatically dropping in 2009, Bogle called the church’s building chairperson, Carole Brooke, and asked if she thought the church would get behind the new center if the construction cost was 15 percent to 20 percent lower.

The project then came to fruition.

First Presbyterian Church’s Family Life Center in Salisbury is “probably all in all the nicest project I’ve done so far,” Bogle says.

Bogle says his own house was probably the toughest project.

“Because really, who wants to work all day then come home and design and draw some more?” he says. “It’s serving us so well, though.”

He says his house requires low energy and gives his family great spaces.

“I would be very interested in helping others produce energy-efficient, function-driven homes, Bogle says.

Bogle says you won’t go into buildings he has designed and see a Bogle signature, clues that only he could have been the architect. It’s simply because he tries to give clients the spaces they want.

“I try to be very client-minded,” he says. “I don’t care whether people know I’m doing it or not.”

Bogle thinks the reason he enjoys downtown renovations, churches and non-profits is the second level of service that comes with those projects.

“I’m serving my downtown community by bringing life into it with these renovations and adaptive reuse apartments,” Bogle says. “With churches, I’m serving that body of believers by producing facilities that aid them in the missions they undertake.

“Non-profits are about the same — serving the clients and their missions.”

Through the years, his work as an architect has taken him from Pinehurst in the east to Jackson County in the N.C. mountains.

Bogle can’t hide his keen interest in creating downtown living spaces — something he has been enthused about since he was an architectural student at the University of North Carolina at Charlotte.

Bogle’s college thesis dealt with downtown living and Salisbury was central to its theme.

“It’s a huge change from what it was then, but we still have a long way to go,” Bogle says.

Paula Bohland, executive director with Downtown Salisbury Inc., says the central business district has 146 residential units at present. That number includes apartments for the elderly and disabled at the Yadkin House, the former Yadkin Hotel.

The upper floors above existing downtown businesses probably have the potential for at least 100 more units, Bohland estimates. That would not count residences that could be provided with infill projects, she says.

Bogle agrees there is a huge potential in Salisbury’s downtown and praises the city for being proactive in providing grant incentives for projects that restore historic buildings and create residential spaces in the process.

Bohland and Bogle say downtown living is a trend here and nationally with young singles or couples (often without children), or Baby Boomers who have become empty nesters looking for less space but still wanting to feel as though they are in the middle of things.

Bogle says he is involved with another downtown project, which he described as still under wraps. It could result in 16 apartments, he says.

“My goal is to help owners or tenants understand the possibilities and feasibilities of their existing spaces,” Bogle says. He usually starts with a codes analysis, so the client can see if his or her intended project is feasible from a financial standpoint.

Bogle still has to put a lot of things on the walls of his new office. He also has to bring in his drawing table, on which he likes to hand-sketch his ideas.

At home, Bogle and his wife, Katie, have two daughters, Abby and Hannah. Bogle laughs, acknowledging that his daughters probably have the only treehouse in which their father has calculated for wind load.

But he was simply looking after his clients’ best interests.

SALISBURY — Larry Cesario can’t hide his passion for officiating high school football games. “I do it for the love... read more