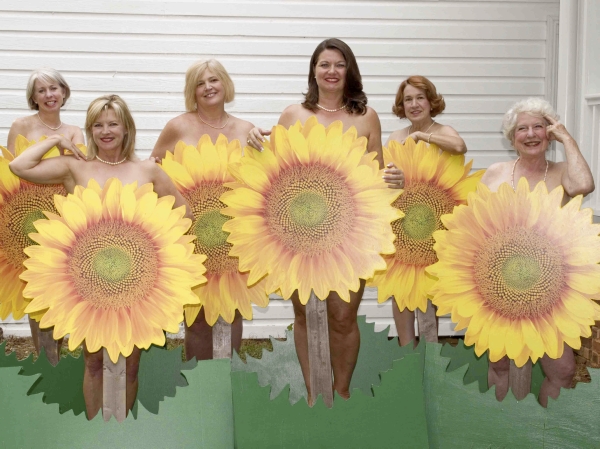 In the interest of total transparency — hmm, might be a poor choice of words — we’re gonna put this right out there: the ladies in “Calendar Girls” are showing a lot of skin. But don’t worry, it’s for a good cause.

The St. Thomas’ Players production of “Calendar Girls” is set for later this month at Lee Street Theater, 329 N. Lee St. Because life imitates art — or is it the other way around? — female cast members have produced a 2016 calendar to raise money for a 3D mammography machine at Novant Health Rowan Medical Center. The hospital is sponsoring the calendar, and Yatawara Gynecology, Health and Aesthetics is the show’s sponsor.

Jenny Hubbard, a cast member who’s led the calendar project, jokes that the cast will most likely be stocking up on calendars for Christmas gifts for friends and family.

If it sounds like the women have had a blast, they have, Jenny says. “I’ve had it on my radar screen for a long time.”

“The men in the cast are so respectful and supportive,” Jenny says. “They’re really been lovely.”

She also gives a shout-out to Lee Street’s Chris Speer for his technical skills. In this play, the lighting is especially crucial.

The play was first a 2003 movie starring Helen Mirren, about a group of women who produce an, ahem, rather interesting calendar for cancer research. It was then adapted to the stage by Tim Firth.

“It was a smashing success in London,” Jenny says.

Several years ago, she inquired about the U.S. rights to the play, and was put on a waiting list. She received an email last year saying the play was available.

“I applied, we got them, and we were on our way,” Jenny says.

It wasn’t long until the idea to do a local calendar came about.

“This calendar has taken on a life of its own,” Jenny notes.

Beth graciously opened her home, the beautifully restored Blackmer House on South Fulton Street, for the photo shoot. Seth Holtzman volunteered his photography services. Nancy Faller made giant sunflowers and prop cupcakes, both of which were used quite strategically for the photographs. Bethany Sinnott and Beth Cook dashed around town, gathering other props for the shoot and the show.

“We’ve just been amazed how people have been so excited by this project,” Jenny says.

This was Becky’s first calendar shoot — along with the rest of the women.

“At 60, that’s what you should do,” she says. “We had such a good time. It was very pleasant. I was happy with my pictures.”

Linda was Miss January, and paved the way for the rest of the women, Becky says. “We had to get down to brass tacks.”

Becky says that all the women wore pearls, but not much else. “When you put on pearls, you’re classy.”

It was a particularly interesting experience for Holly, because she was Seth’s daughter’s first-grade teacher, and Ava served as his assistant for the shoot.

“It went very well,” Holly says. “Seth did a great job. This is just an amazing group of women. I feel so privileged to work with them. It’s just a dream cast.”

She adds, “My character is very proper. I knew I didn’t want to show too much skin, plus I’m a teacher.”

Jenny has savored the entire project.

“There’s something about doing a play that focuses on women,” she says. “It’s special. It’s a lifelong friendship. We are all friends now.”