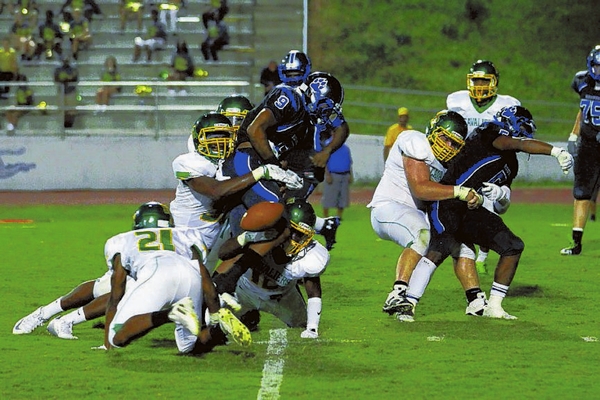 North Rowan's defense strips the Statesville running back of the ball at the Cavaliers' 15-yard line. North's Chris Clodfelter returned the ball for a touchdown, but it was called back because the officials had blown the play dead. Statesville scored on the next play. James Sipes/For the Salisbury Post

Statesville’s elusive quarterback ran for 225 yards and two touchdowns and was at the center of a controversial play early in the fourth quarter of a 35-21 victory.

“That play,” said first-year North coach Ben Hampton, “was a 14-point swing. We get a huge turnover, go down and score and the white hat calls it an inadvertent whistle. We were down by three (touchdowns) when we should have been down by one.”

Allow Hampton and the Cavaliers a few moments to decompress. North (1-2) fought the unbeaten Greyhounds (2-0) for the better part of three quarters, even though Ramseur had himself a field day. But in the opening minutes of the fourth the Cavs lost their focus, then their cool and finally the game.

“You can’t help when that happens,” said North Rowan defender Zion DeBose. “We can’t beat 16 people. We can only beat 11.”

Let’s set the scene. North trailed 14-7 at halftime and spent the third period running a three-and-out clinic. Then Ramseur — a slippery, 6-foot-1 senior who began the game wearing jersey No. 7 and finished it in No. 9 — scored on five-yard rollout with 43.1 seconds remaining in the quarter, stretching Statesville’s lead to 14.

“The kid is such a fast decision-maker,” North’s Jake Pritchard said after recovering three fumbles. “He’s either going to find somewhere to put the ball or he’ll find a hole to run through. He’s that special.”

The Cavs found out the hard way just moments later. After a turnover gave Statesville a first-and-goal from the 7-yard line, Ramseur launched the fourth period by blasting into North’s defensive front, only to be thwarted at the line of scrimmage.

“We contained him to an extent,” linebacker Omar Lipscomb said after North was clobbered statistically. “But he’s the kind of player who can make you miss. If we do what we’re supposed to do — keep him out of the end zone — this would have been a close game.”

It almost was. North seemingly stripped the ball loose from Ramseur,  junior defensive back Chris Clodfelter scooped it up and took off on what appeared to be a magnificent, 85-yard touchdown play.

Seconds later the play was called back.

“The way it was explained to me (by the referee) was that it was an inadvertent whistle,” Hampton said. “Which means he didn’t mean to do it. He accidentally blew the whistle. He blew the play dead, brought it back and gave them another chance.”

Clodfelter simply followed his instincts. “I saw the ball on the ground, picked it up and ran it in,” he said. I didn’t hear any whistle. I just saw green grass.”

One snap later it was 28-7 and the Cavs were deflated. “A negative turning point for us,” Pritchard said.

Lost in the confusion was a strong game by North quarterback Corbin Smith, who relieved ineffective starter Josh Ellis. Smith completed 10 of 14 passes for 122 yards and steered the Cavs to couple too-late-to-matter touchdowns. “When he came in, the passing game changed,” said wideout Alonzo Sirleaf. “He started gaining yards.”

It hardly mattered on a night when Statesville bulldozed its way for 376 yards on the ground. The Cavs countered with only 36 yards rushing.

“Our kids never quit,” Hampton noted. “We score twice in three minutes late in the game. That says a lot about the backbone and gumption they have. It was just a lot to overcome tonight.”