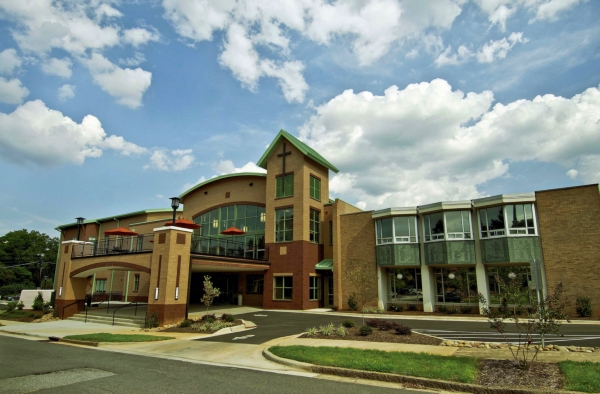 The church, located at 200 W. Innes St. in Downtown Salisbury, opened its new facility in July. Its first event in the new space was hosting nearly 300 children at Vacation Bible School the first week in August. “It was the perfect way to break it in,” says Kim Lentz, director of children’s ministry. “What an amazing place.”

The facility is a byproduct of the congregation’s expanded ministry to children and youth contemporary worship, and community ministry,” says Rhodes Woolly, senior pastor of St. John’s. “We live in a changing landscape that demands a different approach to ministry. This facility and the energy surrounding it allow us to move in that direction.”

A centerpiece of the building is the Faith Center, which will house contemporary worship, concerts, and other community events. The original contemporary service had steadily grown for more than a decade and had simply outgrown the space in its original location.

Although a typical contemporary service will include people from all age groups, a primary focus is on younger generations. “The church has to provide a more relevant, authentic space for younger generations,” Woolly says. “When less 10 ten percent of 16-29 year olds are actively engaged in a local congregation, we have to take notice.”

Additionally, the new building has a beautiful gathering space called Peeler Hall, which looks out onto Whitton Terrace. Both spaces were given by the Whitton family — Jim Sr., and his children, Jim Jr., Jane Trevey and Anne Bolyea —who served among the lead donors for the $5.2 million project.

The downstairs is devoted to youth ministry — a large, indoor activity space called the Pit, a smaller gathering space called the Exchange, and two spacious youth rooms. The high school youth room is called Fuel, a nod to the service station that once stood where the current chapel was built in 1967. The Well provides space for middle school youth and confirmation, and is located over a hand-dug well on the property. The rebuilt well will be a focal point of the room.

The Faith Center has a seating capacity of 350 and brings contemporary worship to an enhanced level. The space is outfitted with the latest in lighting and sound technology, including a video screen that is 20 feet wide and 12 tall. Besides using the screen for worship services, the congregation already has found other applications as well, when a large group of fans cheered on fellow members Ellen Yang and her dad/coach, Steve, as their team won the Little League Softball World Series last month.

Beginning Sept. 13, the Faith Center will offer closed captioning capability for hearing impaired worshippers by using their own handheld Apple or Android device. A dedicated computer learns the speaker’s voice and sends it to a Web site that people can log onto and see what’s being said. The words appear on the screen in real time.

The ability for closed captioning is possible thanks to a campus-wide commercial wi-fi system powered by Fibrant.

“Technology changes so much, but this system gives us the ability to stay ahead of the curve,” says Taylor Hutchins, the congregation’s media specialist.

“We’re so thankful for the opportunity to build this kind of facility,” says Woolly notes. “But at the end of the day, St. John’s is about far more than bricks and mortar. We’re a congregation with open arms, a compassionate heart, and a firm recognition that we’re all on this journey together.”

The congregation’s traditional worship services are held Sunday mornings at 8:30 a.m. in the chapel and 11a.m. in the sanctuary, a service that has been broadcast on 1490 AM WSTP for 75 years. The contemporary service moves to a new time on September 13 — 9:27 a.m. “Look up Acts 9:27 and you’ll understand,” Wooly. “Our heart is to be a welcoming, encouraging community, so it makes sense for our worship time to reflect that same spirit.”