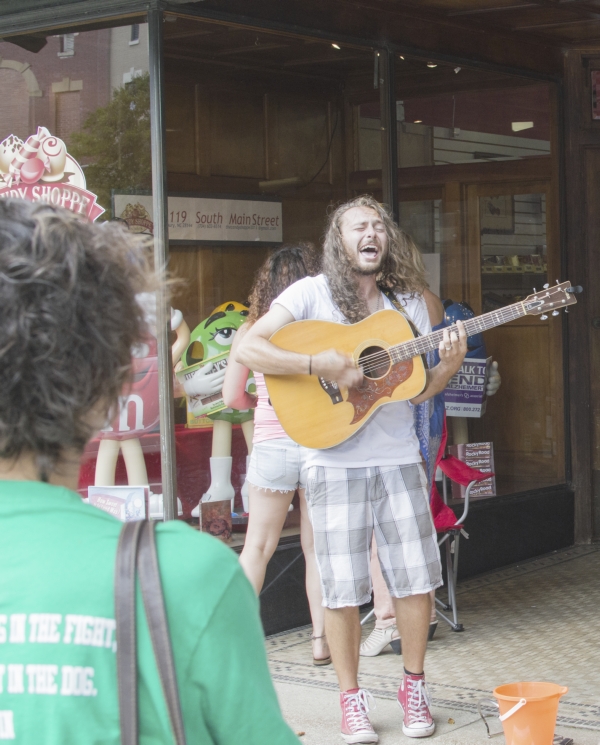 The sweet sounds of musicians’ songs echoed through downtown Salisbury on Friday during the third-annual Busker’s Bash.

About 50 performers pandered to the crowds of people who roamed through downtown. Among the many performers were single musicians, bands, clowns and dance groups. Each came with their own unique character.

The band Delta Holler, for example, was entirely Catawba students. Delta Holler’s members joked that they were comprised of “big-hipped women and big ol’ men.” Their members hailed from states across the U.S.

Delta Holler played in front of Rowan Museum. The dozens of other groups were spread down Main and Innes streets. While performers catered to the crowd, onlookers dropped custom guitar picks into orange buckets to symbolize a vote.

Guitar picks as a form of voting date back to the first year of Busker’s Bash.

Salisbury resident Sue McHugh has been a lead organizer of the event since its first year. McHugh said Busker’s Bash started as a way to bring more people into downtown shops. McHugh said the event’s popularity was immediately apparent. In its first year, organizers ran out of guitar picks and maps quickly.

This year, there were about 5,000 guitar picks for voting. In its first year, Busker’s Bash only had a few hundred.

The event has blossomed from about 24 performers in its first year to nearly 60 on Friday.

McHugh said Busker’s Bash has potential to become a destination event — attracting performers and attendees from far outside of Salisbury. Already, people travel from nearby cities such as Statesville, she said. One performer even traveled from South Carolina.

Busker’s Bash performers catered to the crowds for two hours on Friday. Rain showers ended some performances early. Then, event organizers counted the thousands of guitar picks in the Empire Hotel.

Winners were eligible to receive cash prizes, Downtown Dollars and gift certificates. The first place winner was the Backcreek Bluegrass Band, who will be invited to be the opening performer at the Sept. 26 Music at the Mural concert.

Second place was the Millpond Boys. The Bemus Kids came in third.