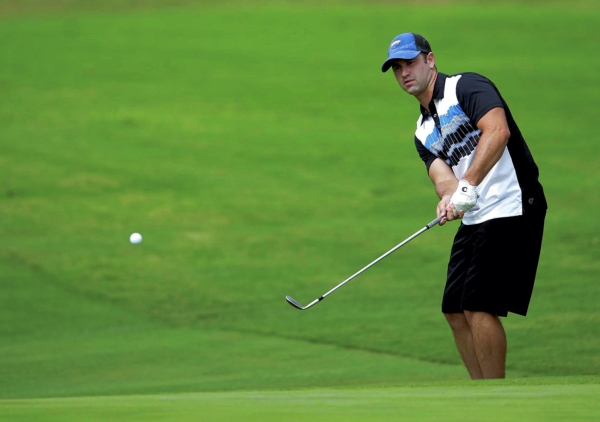 SALISBURY — To the casual observer, a quick glance at the pairing sheets after the first day of the annual Crowder/Dorsett Labor Day 4-Ball golf tournament Saturday may have looked like a series of monumental upsets.

All totaled, based on seeding in the championship flight, there were “upsets” in five of the eight of the matches. But the players and tournament officials for the 62nd Labor Day event at the Country Club of Salisbury this weekend know better. At this level, there are no true upsets.

“There are so many good players in this county now,” notes Labor Day golf tournament chairman Jake Alexander, “and a lot of them are really talented young guys. A 16 beating a one seed in our championship is not that big of a deal. The talent is just that good.”

The top seeds and the flights for the tournament were determined a week ago with a stroke play qualifier. The top 16 teams were placed in the championship flight with the rest of the 123 two-person teams placed in 10 regular flights, a men’s 55-over group, a men’s 65-over flight and a women’s flight. The top 16 teams had qualifying best ball scores ranging from 64 to 69, meaning a lot of very good golfers, including former champions, did not even make the top group.

In the championship flight, the defending champions and top seeds were Charlie Graeber and Michael Childress, but they were bounced out Saturday by the father-son team of Glenn and Roy Dixon, 3 and 1. The Dixons recorded six birdies on the day, five by Roy, including the clincher on the 17th hole. They led by three at the turn, but had to hold off a back nine charge by Graeber and Childress.

“It was a strong finish by both teams,” Glenn Dixon said,  noting the two teams swapped birdies down the stretch. “It was a very competitive match especially on the back nine.”

Roy Dixon just graduated last spring from UNC-Greensboro where he was a top collegiate golfer and scholar athlete. He is now a first-year law student at UNC-Chapel Hill but made the time from a busy class schedule to come home and compete again with his father in the tournament. “We have been playing together long enough that I know pretty much what to expect out of my dad on the course,” Roy said. “We always have a good time win or lose.”

The Dixons got a little payback after falling in the semifinals to Graeber and Childress last year and they now try to become the first father-son team to win the Labor Day event since John and Johnny Kyger claimed the title in 2008. On the flip side, no team has won back-to-back Labor Day Championships since John Isenhour Jr. and his son, Tripp, won in 1988 and 1989.

Next up for the Dixons, today, will be the 9th-seeded team of Michael Swaringen and Chris Williams, who topped 2014 runners-up Josh Brincefield and Eric Mulkey, 2 and 1. It is Swaringen’s third Labor Day event but his first partnering with Williams, from Kannapolis. “This is the deepest championhip flight I have ever seen,” Swaringen noted. “You really have to play well and make putts.”

Michael Dorsett, who teamed with local prep star golfer Nick Lyerly as the 15th seed, takes a survive and advance approach to the tournament after their tight 1-up victory over 2nd seed Catawba golfers Wes Cline and Tyler Mulkey.

“It was one of those rounds where we did good enough to get by,” Dorsett said. “the front nine was ugly but we made three birdies on the back nine and that was big.”

Dorsett also said seedings and qualifying scores are deceptive. “The key is to just get in the championship flight,” he said. “It doesn’t matter how low you score. It is a whole new ball game once you get in and all 16 teams are really good.”

Sunday’s opponent for Michael Dorsett and Lyerly will be Brad Vinson and Dwayne McIntyre, one of the last teams off the course Saturday evening with a 1-up win in 19 holes over Seth Correll and Chris Nesbitt. “It was a really tight the whole day,” Vinson said. “We were pretty much square all day.” On the decisive 19th hole, however, Vinson closed out the match with a par after Nesbitt and Correll failed to reach the green in regulation.

The other first day winners in the championship flight included 14 seed Drue Davis and Derek Lipe with a 3 and 1 win over 3rd seed Kevin Lentz and Cole Buckwell. Davis and Lipe next play Richard Cobb and Robert Jordan this afternoon after they dispatched of former Labor Day champs Christopher McCoy and Frederick Corriher, 4 and 3 on Saturday.

The 4 seed Keith Dorsett and Ryan Honeycutt team held off top young Concord golfers Walker Cress and Stephen Carroll, 1-up. They will next face 5th seed Phil Miller and Andrew Morgan, winners over Clay Kilgore and David Miller, 3 and 1.

Dorsett, the 2004 champion and Honeycutt a top local golfer and winner of the Rowan Amateur several times, are teaming together for the first time in the Labor Day tournament. They will be a formidable opponent over the final two days after surviving a tight battle with Cress and Carroll. The 16th hole was the key to the win, Dorsett confirmed.

“Going into 16, we had just pulled even but we were both off the green,” Dorsett said. “I was able to get on and hit a 12-footer for par that happened to win the hole. After that, Ryan and I just held them off on 17 and 18 to get the win.”

The four second round matches in the championship flight tee off beginning at 1 p.m. this afternoon at the Country Club of Salisbury course. Play in other divisions started at 8:00 this morning.

For a complete list of Saturday’s results and tee times for today’s matches in all flights and divisions see the Scoreboard on page 2B.