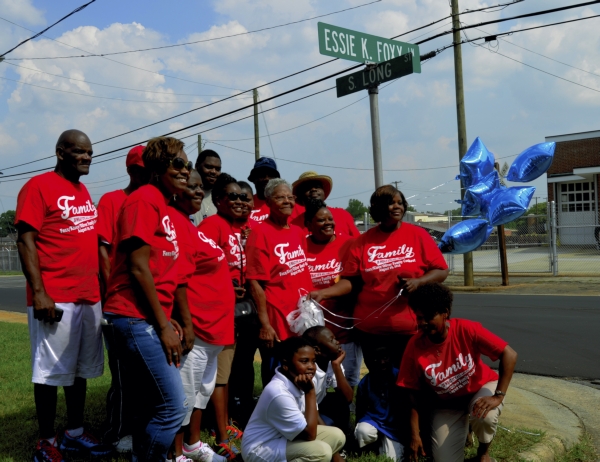 Family members pose for pictures with Essie Mae Kiser Foxx, center, who the town of East Spencer renamed Nash Street in honor of on Friday afternoon. Foxx, 82, is a native of East Spencer, and a longtime supporter and organizer of the Dunbar Mass Reunion events. Shavonne Walker/Salisbury Post

EAST SPENCER — Essie Mae Kiser Foxx could probably see the corner street sign from her front porch. The sign now bears the name Essie K. Foxx Lane in honor of the 82-year-old community pillar who has spearheaded the Dunbar Mass Reunion for over 30 years.

Foxx, who was surrounded by her family, friends and town officials on Friday, expressed her gratitude to those responsible for the name change. She’s lived on the same corner, at Long and Nash streets, since she was a child.

Her granddaughter, LaSheka Foxx Walker, made a request to the town board earlier this week asking the board if they would consider renaming Nash Street or some other road after the elder Foxx. The board agreed and the plan was set into motion to have the street renamed. This weekend is the Dunbar Mass Reunion. It will also be Foxx’s last time organizing the event.

Foxx, a native of East Spencer, said she was “grateful to God” and the town board.

“I feel blessed,” Foxx said with her hands clasped together.

She said she’s always felt she did what she was “supposed to do” in helping others in her community. Family members say she’s been a mother to them and so many others in the community and the honor was so deserved.

LaSheka Foxx Walker said her grandmother is a pillar in the community and deserving of the honor.

She said the idea was first mentioned about two years ago, but wasn’t acted upon. So she thought since it was her grandmother’s last year with the Dunbar reunion it was time.

Foxx Walker said what better way to commemorate her grandmother’s last year than with renaming the road.

Mayor Barbara Mallett read a proclamation from the town citing the name change and the contributions Essie Mae Foxx has made to the town.

Tina Foxx Wallace, Essie Mae Foxx’s youngest daughter, said she was overcome with joy at the sight of her mother’s name on the street sign.

She said efforts had been made on a few other occasions to have a street renamed, but she was grateful that the time had come.

Foxx Wallace said she’s also glad her nephews and the other younger members of the family were present to see the name change unveiled.

“When they grow up they’ll be able to tell their children they were here Sept. 4, 2015 when they changed the name of the street in honor of their great-grandmother,” she said.

Foxx Wallace said her mother has done so much for her family and the community and it’s because of her example of selfless acts that she and the rest of her siblings have been able to be so giving to others.

She also thought of her late father, Howard Foxx Sr., whom she was sure smiling down from heaven in approval of his wife’s accomplishments.

Deloris Foxx, the oldest sister of Essie Mae Foxx, said her sister was more like her mother.

“It feels great,” Deloris Foxx said to be able to witness such an occasion.

Grandson Tony Hillian said he was overwhelmed and overjoyed at seeing the street corner where he also grew up be changed to bare the name of his grandmother.

“She helped raise all of us,” Hillian said.

“She is the commander-in-chief,” he said with a smile.

Hillian said he’s just so glad this happened at time when his grandmother was able to see it. He said she gave them all a scare a few years ago when she died and was brought back to life. She’ll turn 83 on Oct. 31.