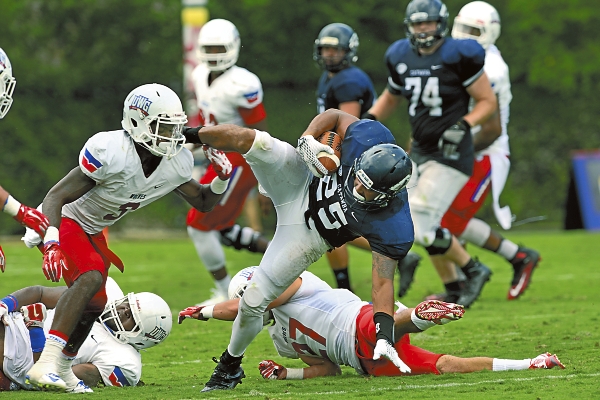 SALISBURY — Catawba football coach Curtis Walker talked about a season-opening game with West Georgia as a chance to “check the oil” and find out exactly where the Indians are.

The Indians were a few quarts low in the second half and got blown out, 44-13, by the Wolves at Shuford Stadium on Saturday afternoon.
“We were flat in the second half,” Catawba running back Cary Littlejohn said glumly. “The first half we showed we can compete, but West Georgia has a great team. In the second half, they did what the great teams do — they turned it up a notch.”
The Wolves, ranked anywhere from second to eighth in national Division II polls, were a finely tuned engine in the second half and roughed up Catawba with 28 unanswered points.
“Catawba is strong and well-coached and it won’t surprise me if they’re competing for their conference championship the last week of the season,” said sweater-vested West Georgia coach Will Hall. “But we’re deeper than they are. That was the key factor. We wore them down.”
Hall pointed out West Georgia’s depth showed up on special teams. Two-point conversions after each of their first-half TDs changed the game, and the Wolves’ second touchdown came on an explosive, 66-yard punt return by Telvin Brown. The Wolves’ coverage teams were outstanding all afternoon and kept Catawba backed up in the second half.
“Everyone on their team had a role and their guys were always fresh,” Littlejohn said.
Catawba lost in all three phases of football and posted ugly offensive numbers — 48 passing yards, 2.6 yards per running play and 2-for-15 on third-down conversions.
Part of that was West Georgia’s defense producing eight tackles for loss. Part of it was an injury that knocked out Catawba running back David Burgess. Catawba QB Mike Sheehan and Littlejohn also got banged up, although both hung in there most of the game.
“Sheehan got hurt some in the first quarter and we couldn’t do all the things we wanted to do offensively,” Walker said. “He showed a lot guts to keep playing.”
Catawba’s preseason All-SAC linebacker Kyle Kitchens had a terrific outing with three tackles for loss, two fumble recoveries and a forced fumble. Linebacker Jamal Lackey forced a fumble with a sack and also made the recovery.
Catawba trailed 8-0 early and was in danger of falling behind by two touchdowns when Kitchens hit QB Dallas Dickey trying to turn the corner near the West Georgia sideline. Kitchens caused a fumble that was scooped by Will Jackson. After that, Catawba was the aggressor for the rest of the half.
West Georgia, a 2014 national semifinalist, lost three first-half fumbles and also had a bad snap on a punt. Catawba failed to fully capitalize on the opportunities those miscues provided, but Chad Hollandsworh kicked two field goals and Littlejohn made a tumbling dive to the end zone from the 5-yard line to cap a short-field drive.
“Their defensive line squeezed and our o-line pushed and made a big hole for me,” Littlejohn said.
Catawba headed to halftime down, 16-13, and with lots of momentum.
“The second quarter was pretty exciting because we played the kind of football we’re capable of,” Walker said.
But the second half was a nightmare for the Catawba fans in the crowd of 2,217.
“I don’t know what happened,” said veteran cornerback Mark McDaniel, who made five tackles. “For some reason, we didn’t have the same intensity in the second half.”
West Georgia had enough intensity for both teams. Dickey fired touchdown strikes to acrobatic receivers Qua Strickland and Shaq Hill in the third quarter to make it 30-13.
“What we talked about at halftime was protecting the ball better and getting the ball to our playmakers on the edge,” Hall said. “We knew if we did those things we’d be all right.”
The Wolves’ dominance in the second half was total. They had 10 first downs in the third quarter to Catawba’s one and out-gained the Indians in that quarter, 213 yards to 12.
“They punched us in the mouth,” Walker said. “And we didn’t respond very well.”
A 15-play, 91-yard scoring drive by West Georgia that bridged the third and fourth quarters and made it 37-13 finished off any dreams of a comeback. West Georgia backup QB Will Garrett ran for a score with 6:05 left to conclude the scoring.
“We played too carelessly and made too many mistakes to beat a good team,” Walker said. “But we didn’t roll over. We did some things we can build on.”
Catawba limited West Georgia to 67 yards in the first half and the Indians’ offensive line allowed only one sack for the game. Those are things that can be built upon.
“It was a much closer game, a much more competitive game, than the final score looks,” Hall said.
Next Saturday, Catawba plays at Davidson at 7 p.m.

Livingstone romps past Benedict in opener