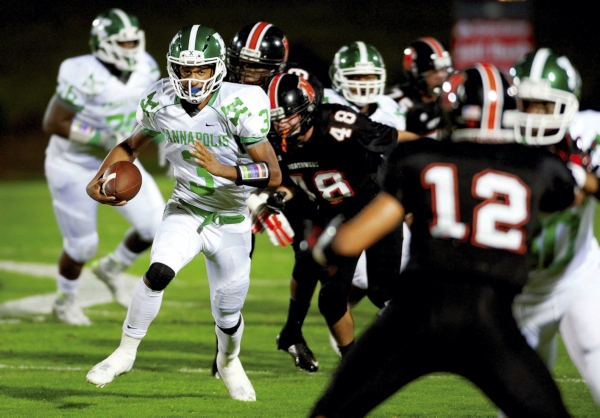 KANNAPOLIS — Gerald Ford was in the White House the last time Northwest Cabarrus beat A.L. Brown in football, and the Wonders are still exacting payback.

Since losing to the Trojans in 1976, the Wonders have won 33 straight times in the series.

A.L. Brown survived a 45-minute weather delay at the start and some mercy-rule comedy at the end and pounded the outmanned Trojans 56-7 on Friday.

“We did a real good job handling the weather delay,” A.L. Brown coach Mike Newsome said. “We’ve got some 16-year-old kids, but they kept their focus.”

It took the Wonders 18 seconds to score. Northwest won the toss, deferred their choice to the second half and kicked off short. A.L. Brown defensive end Cameron Rodgers cheerfully fielded the ball and rumbled to the Trojans’ 35 on a spirited return. Quarterback Damon Johnson fired a 35-yard TD pass to Casey Ritchie on the Wonders’ first snap — and the rout was on.

“We’re getting better,” Johnson said. “We know a lot of big games and a lot of tough games are ahead of us, but we’ll be ready.”

Johnson threw for 202 yards and three touchdowns — all before halftime — while Sandon McCoy performed his man-among-boys act one more time for 97 rushing yards, 40 receiving yards and two TDs. McCoy’s scariest play, one on which he flattened or hurdled half the Trojans (0-2) was called back by a flag.

The Wonders’ defense created five turnovers (three fumble recoveries and two picks) and was more even more impressive than the offense.

“We’ve improved a lot this year,” Rodgers said. “Less arguing and more brotherhood. Guys are swarming to the football, and if someone misses a tackle, the next guy makes it.”

Northwest has a decent triple-option attack, but the Trojans were posting more losses than gains against A.L. Brown’s first-team defense. There were a lot of second-and-13s and third-and-9s, and that puts an option team behind schedule and in deep trouble.

“It helped us some that were seeing an option team for the second week in a row,” Newsome said. “Guys were disciplined and playing their assignments and responsibilities.”

The Trojans had a nice drive for a score to start the second half, but the Wonders (3-0), who led 35-0 at the break, had many backups on the field at that point.

“It was just a heck of an effort by our defense,” Johnson said. “Elijah Hall and Steven Howie were great. I’m proud of all those guys.”

After Northwest finally got on the scoreboard, the Wonders answered with a Jayln Cagle TD, his second of the night, just 38 seconds later.

After backup QB Zac Williamson zipped a short TD pass to Brandon Dry with 3:08 left in the third quarter for another TD, Nate Williams’ PAT gave the Wonders a 49-7 lead — and triggered the 42-point margin mercy rule. A running clock was employed after that.

The running clock essentially ended the serious football for the evening, but the Wonders managed to score on fourth-quarter TD when cornerback Shymere Scott, making an offensive cameo, scampered to the end zone.

The last two games have been the prep equivalent of NFL preseason games for the Wonders, who outscored South Rowan and Northwest 123-7. But a home game with Mooresville next week figures to provide a serious challenge.

“I’m pretty happy with where we are,” Newsome said. “I thought we gave a very good performance — offensively and defensively.”