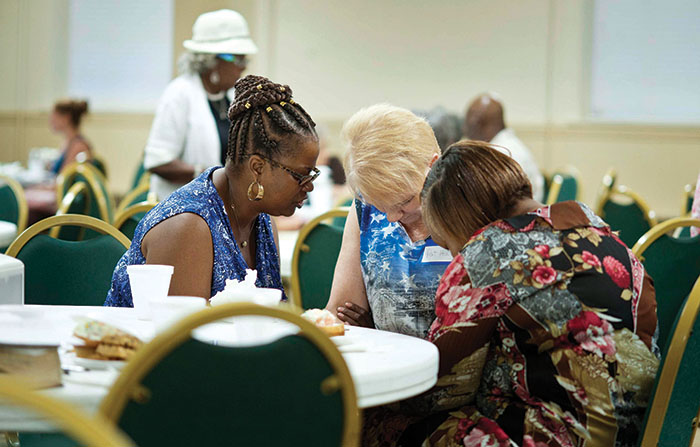 May the vital messages communicated in War Room ignite a national revival of people praying, worshiping and praising God in the workplaces, marketplaces and public places all over our country

We are one in Christ Jesus… I love this ..

Great story on how War Room is impacting the lives of people in our region.

As one who wants to trust the “system,” it is reassuring that this dip in test performance was fully anticipated as an ordinary expectation during implementation, and not any sort of failure in central office leadership.

I hope our legislature will heed the recommendations of Dr. Atkinson.

I take no stock in test scores.

With the exception of North Rowan Elementary, I think these schools should be applauded for showing phenomenal growth. Let’s continue to watch the numbers and see the progress in the system. Our teachers and administrators desperately need a community that’s vested in our children. Speaking positively about our system is a great first step. Let’s believe it can work — and better yet, step foot in a public school every once in a while and contribute to what the teachers are doing. Exciting things are happening in RSSS.

I tend to agree with Hood on some points here. Mainly, his main point that voters have been looking for someone who can inspire and bring back the fond memories of the past. Both Reagan and Clinton had one very important quality that was vital in their electoral success: charisma. I firmly believed back in 2008 that the same reason Obama won was for the same quality; that ability to use natural oratory skills to rope in a crowd and inspire them. …

However, as time goes by in this electoral season, I am becoming more and more convinced that we are undergoing a major political paradigm shift in this country.

Congratulations to the LandTrust for closing the deal on the Ft. York property!

Davidson County looks forward to partnering with you on making the historic Trading Ford District and Yadkin River Heritage Corridor a true destination for folks to visit and recreate while learning about the past!

This is so timely with Davidson County now taking ownership of the Wilcox Bridge.

Great news and Congrats to the Land Trust. Now if we could just get the old N.C. Finishing plant cleaned up and turn it into a water park, fairground or other destination, we might have something here.

To compete on that national level requires much diligence, and follow through. But to win on the national level, requires desire and a clear vision to see destiny in slow motion. These young ladies were at the top of their game when it mattered the most, and that’s what true champions do. Congrats!

The skills they have acquired and demonstrated through this experience will go with them throughout their lives. Very proud of them!

Seems like something that’s been heard before, just a different entity and location. Maybe this one will be as claimed. We can only hope, for the church and China Grove. It’s high time something was centered in the southern portion of the county.

Sounds like the property tax allocation has already been considered. The other considerations are tax on income unrelated to the church’s mission (UBIT) and tax-exempt financing, if any.

God has big plans and Cornerstone is going along with it all.

Now the county will have an overflow location when the $50 million West End convention/enrichment center reaches maximum capacity.

Don’t hate, celebrate! It’s time for the church to be the head and not the tail!

Where exactly would elementary schools put the “extra teachers” promised in this deal? Few schools have “extra classrooms” that are empty and waiting. What about extra teaching materials? Will there be money for those? Sounds like more empty promises to me.

Mr. Hoffman, we agree. All incidents were tragic, and young black males did murder the TV crew in Virginia and the deputy in Texas.

Please note that the Baltimore and Ferguson eruptions were the products of decades of abuses and exploitation by law enforcement and the criminal justice system. The deaths of Grey and Brown at the hands of the police were sparks that ignited an explosion of rage and frustration that smoldered for decades.

Baltimore and Ferguson were powder kegs with slow burning fuses. The murders committed by the young black men were manifestations of untreated mental illness. The Charleston, S.C., murders of nine worshipers and the killing of two New York City police officers were also deadly expressions of mentally disturbed young men.

Make it a mandatory utility like you do with water and sewer utilities. It’s 2015 and the Internet is a necessary utility.

Here’s an idea. Wouldn’t it work to expand usage to 5 or 6 thousand Fibrant customers? That seems quite doable, with an aggressive marketing campaign to switch. Perhaps the city doesn’t have the resources for this. However, the cost to acquire new users is probably the best investment they could make for the long term.

She is one small drug dealer with no particular ties to big shots, so why arrest her and paste her face in the paper for 10 bucks worth of heroin and $66? Because the police, in cohorts with “journalists,” want to scare citizens with this headline about a heroin dealer, when the real criminal is the cop force that failed to seize the big time dealer that gave this woman .02 grams.

If you believe that, then it is high time to start locking up the people who operate the distilleries and the pharmaceutical industry, among others, and let us not forget the hospitals and doctors who are nothing more than … pushers in your world!

You cannot help those that will not help themselves. I have family members on this crap and it is a living hell. I wish they were all in prison, anyone that sells this — anyone. They can get help there.

Sure, right along with the 1.1 million other nonviolent drug offenders we already have locked up. How’s that working for ya ?

… Prosecutors: No retrial for officer

Kerrick definitely needs to find a new job. If he is that terrified because someone is charging at him with no weapon, hands out front, and decided to fire at someone 12 times, shooting them 10, he should seek other employment. Yes, the blue wall of silence will always stick together.

She was great lady and will be missed by all. Every student that she ever had would say that she was always there for them. She touched thousands of lives she was a great, and caring person.

Not only was she a wonderful coach and teacher, she was an excellent mother and wife and found such joy in being a GiGi. Heaven got sweeter when she arrived! Many prayers and much love to a wonderful family who mourns a great loss!

An excellent math teacher, wonderful friend, and person of faith and courage!

Great coach, but an awesome teacher. Had her in 11th grade for math.

In 12th grade, even though she wasn’t my teacher, you could call her when you needed help and she would allow myself and fellow students to come to her house and help us with homework, to study for tests, whatever we needed to learn the material.

Very patient and very kind and will be terribly missed.

Gina was the best, always with a smile and a kind word. Her teams played at another level, because of her. This is very hard to hear and accept. We pray for her family here in Kannapolis.

She took a lot pride in teaching people to do the right thing in life. She always made things positive out of something negative. Thanks for the Great memories in high school.

Gina changed lives every day. Many hearts are broken. Her spirit lives in all who knew and loved her.

Loved coaching against Gina because you knew she would have her team ready. Always enjoyed pre- and post game conversations.