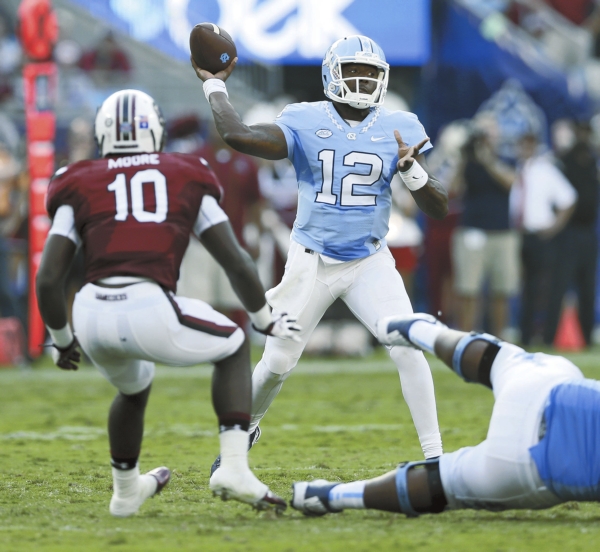 AP Photo/Chuck Burton ... North Carolina’s Marquise Williams (12) looks to pass under pressure from South Carolina’s Skai Moore (10) in the first half of Thursday evening’s game in Charlotte. Moore ended up with two interceptions of Williams passes in the end zone, as the Gamecocks won the opener, 17-13.

Carson, the Gamecocks’ third-string running back, made an immediate impact when he entered the game in the fourth quarter, breaking free around right tackle and racing 48 yards for the go-ahead touchdown.

The Gamecocks intercepted Tar Heels quarterback Marquise Williams three times. Moore helped seal the game when he stepped in front of Williams’ pass on a fourth-and-goal at the South Carolina 8 with 3:40 remaining.

For Moore it was the eighth and nine interceptions of his career. He also finished with a team-high 10 tackles.

Williams finished 19 of 31 for 232 yards and one touchdown. Elijah Hood led UNC with 139 yards on 12 carries and Bug Howard had six catches for 114 yards, including a 21-yard touchdown reception.

South Carolina quarterback Connor Mitch was 9 for 22 for 122 yards and a touchdown in his first career start before leaving with a hip injury in the fourth quarter.

Mitch started slow but improved as he became more comfortable in the pocket.

Known as a traditional pocket passer, Mitch showed some surprising mobility rushing for a team-high 47 yards on seven carries in the first half.

He also showed some feistiness, penalized 15 yards for taunting after completing a first down pass in the third quarter.

The Tar Heels were coming off a horrendous season on defense allowing a school record 39 points and 497.8 yards per game in 2014.

But under new defensive coordinator Gene Chizik they tackled better and applied more pressure for three quarters, shutting out the Gamecocks in the first quarter and taking a 13-10 lead into fourth quarter.

“Their defense got the best of our offense,” South Carolina coach Steve Spurrier said. “We were very fortunate.”

But the game changed when Carson took a handoff from backup quarterback Perry Orth and raced around right tackle and down the sideline untouched for a 48-yard touchdown on his first carry of the game.

Williams, on the other hand, couldn’t seem to find a rhythm for the Tar Heels.

On North Carolina’s first drive he didn’t appear to see Moore step in front of his intended receiver in the end zone and was picked off.

In the second half, he overthrew an open Ryan Switzer on a simple receiver screen and then followed that with an interception on the next play.