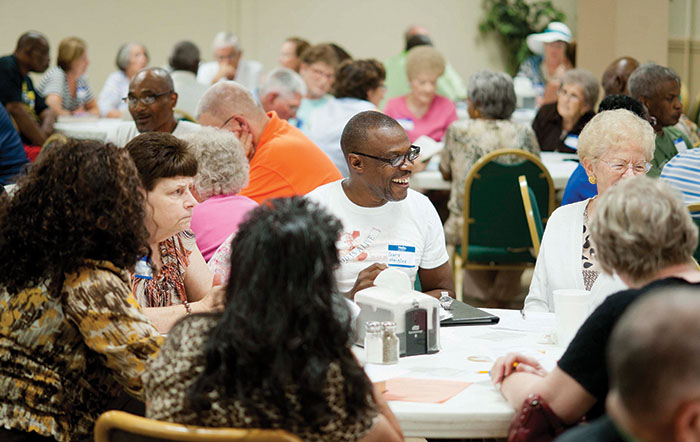 The Rev. Gary Haigler, center, from Mt. Zion Missionary Baptist Church, moderates his table during an hour-long discussion. Members of several Salisbury congregations gathered in the fellowship hall at First Baptist Church on Wednesday evening to fellowship and have frank discussion about their spiritual lives. The gathering brings together the churches to help start smaller Bible studies modeled after the new Christian movie, ‘The War Room,’ which opened last weekend. Jon C. Lakey/Salisbury Post

“For where two or three are gathered in my name, I am there among them.”

Christians have long gathered in prayer, individually and corporately, but the recent release of the movie, “The War Room” has given three local churches a reason to come together to strengthen the prayer life of their parishioners.

Additionally it’s an opportunity for one white church and two black churches to form relationships and have open and honest discussions on prayer and on race relations.

“The War Room” tells the story of a black couple who seem to have it all — high-paying jobs, a beautiful house, a precious daughter — yet whose marriage is crumbling. With the help of Miss Clara, an older, wiser woman, Elizabeth, the main female character, learns to use the power of prayer to turn everything around.

Wednesday night, the group completed the first session of the five-session Bible study together, with the option to continue the study in their home congregations.

Groups of eight sat together at round tables, all mixed up and not in congregational clusters. Some two dozen facilitators — one at each table — asked questions about prayer and delved into participants’ relationships with God.

The first question was “What is your earliest memory of prayer?”

Most folks said they couldn’t honestly remember not praying. Most said they were raised in Christian homes.

As a young adult, Sarah Hollifield said, “The Holy Spirit was nudging me, and keeping me going. I knew my mother and father were always praying for me.”

Her tablemate Emily Hounshell said she felt blessed, because her parents said prayers with her every night when she was growing up.

Participants were also asked to rate where they are in their prayer lives, and what they could do to get closer to God.

After a few minutes of group discussion, the Rev. Rod Kerr, First Baptist’s minister of education, showed a clip from “The War Room,” in which Miss Clara tells Elizabeth, her real estate agent, that the younger woman’s prayer life with God cannot be lukewarm.

“You don’t have to step on the same land mines I did,” Miss Clara tells Elizabeth. And then she tells her about the power of prayer.

The reaching out among the three congregations doesn’t end with the Bible study.

Seven years ago, Brown had reached out to First Baptist about worshipping together. There was some type of tension in the air — he doesn’t recall what it was — but God had laid it on his heart to get in touch, he said Wednesday night.

“We Christians need to fellowship together,” Brown said, and the two congregations worshipped together for several years after their first get-together.

When Lance contacted him about “The War Room” project, Brown was happy to come on board, he said. “I think it’s good we all get together. I sense it in my spirit that we are in the end times. These events ask us, ‘What are you gonna do about it?’ Those of us who do love Christ must make a stand.”

For these three congregations, that means seeing a movie together, worshipping together, studying the word of God together, and praying together.