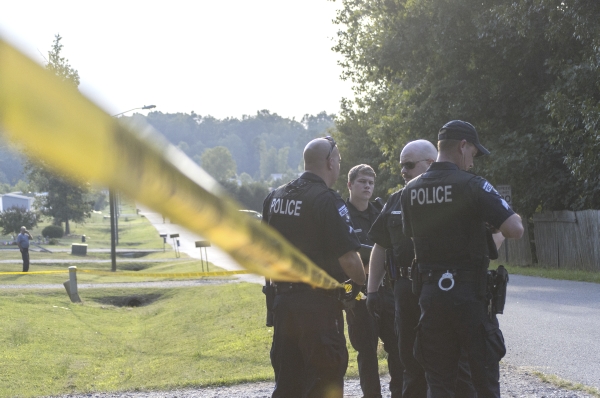 Josh Bergeron / Salisbury Post - Police officers stand outside of a house that was taped off in 2015 after a reported shooting.

One dead after shooting on Rachel Lane

One person was killed and two others were injured Wednesday in connection with a shooting in the 1000 block of Rachel Lane in Salisbury.

The first police officer arrived at a Rachel Lane home at 6:19 p.m., seven minutes after the call came in reporting a disturbance with a possible gunshot victim inside the residence, according to a Salisbury Police Department news release.

When officers arrived, they found two people who had been shot. One was dead.

Investigators were still working Wednesday evening to identify the fatal gunshot victim, according to the news release.

One of the injured was identified as Tonya Veann Wilks, of the 1000 block of Rachel Lane. She was transported to Novant Rowan Regional Medical Center and treated for what police called non-life-threatening injuries.

A third person, Desmond Kirkland of the 500 block of Neelytown road in China Grove, also showed up at the hospital in Salisbury with a gunshot wound that was not life threatening. He arrived in a private vehicle, but was linked to the Rachel Lane incident, police said.

The news release said all parties have been located in the incident. No charges had been filed late Wednesday, and an investigation is ongoing.

Police remained on the scene for hours after the shooting. A white single story house was surrounded by yellow police tape. Residents of the neighborhood drove past parked police cars and nonchalantly navigated around a group of police officers standing in the road.

Investigators ask anyone with information about the shooting to call the Salisbury Police Department at 704-638-5333 or Crime Stoppers at 1-866-639-5245. These calls can be made anonymously.

Editor’s note: this story has been updated to include the entire rankings list of schools in the Rowan-Salisbury System. A majority of... read more