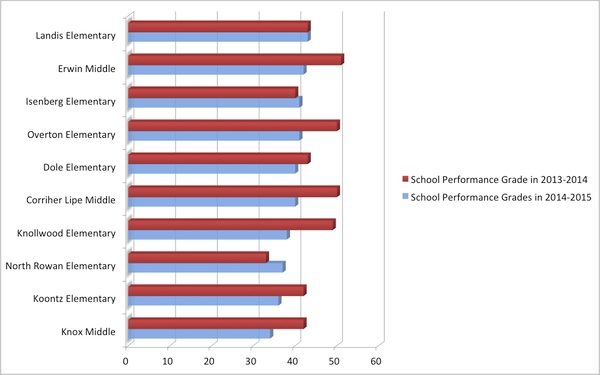 Editor’s note: this story has been updated to include the entire rankings list of schools in the Rowan-Salisbury System.

A majority of schools in the Rowan-Salisbury School System received grade of D or F in the most recent state performance review, but the results may be influenced by factors other than the method of teaching.

Rowan-Salisbury School System Superintendent Dr. Lynn Moody tied the results to a number of recent changes in curriculum. In some cases, poverty may also be a factor in underachieving schools, according to Moody and State Superintendent June Atkinson.

Test scores comprise a majority of the formula for determining letter grades — 80 percent. Improvement or growth of students makes up 20 percent. Together, they make up the school performance grade — most commonly portrayed as a letter.

“Many teachers became first-year teachers all over again with the way instruction was being delivered to students in our classrooms,” Moody said. “We are working hard at staying the course in changing our teaching and learning environments, because we know this is what is best for our students.”

Because of the changes, Moody said she expected some sort of dip in the state’s results.

“It’s the implementation dip,” she said. “You would anticipate that in a building process, it would take some time to make the new processes part of a routine.”

In a news release, Atkinson remarked that schools with a high percentage of poor students were most likely to receive D or F grades.

“We know that students who come from poor circumstances often make significant academic growth each year, but they often begin school behind their more affluent peers, and have many obstacles to overcome,” Atkinson said.

The data released by the state show schools with 50 percent or more students in poverty have a 98 percent chance of being in a school given an F grade.

“The real issue is, what are we going to do about poverty?” Moody said.

However, it wasn’t all bad news for Rowan County. Several schools improved their school performance grade in individual areas. Mount Ulla Elementary, for example, raised its math grade by eight points, and was the highest-rated school in math for the Rowan-Salisbury system. Faith Elementary was first in reading, according to the state’s report.

A plurality of schools— 41.8 percent — across North Carolina received a grade of C. The next largest subset of schools was B at 23.9 percent of all schools in North Carolina. Grade designations were set on a 15 point scale.

Test scores would see a big jump, she said, if lawmakers spent more on pre-school to prepare poor children, changed the academic calendar which now mandates by law a 10-week summer break for most schools, and expanded summer reading camps now offered to third graders to include kindergarten through second grade.

“Unless we address those,” Atkinson said in an AP interview, “we will continue to struggle, especially at the elementary level, to get students reading at grade level.”

Schools receiving a B grade for 2014-2015 in the Rowan-Salisbury System included:

Schools receiving a grade of D include:

Schools receiving a grade of F include:

SALISBURY — The LandTrust for Central North Carolina has announced its purchase this summer of the historic Fort York site... read more