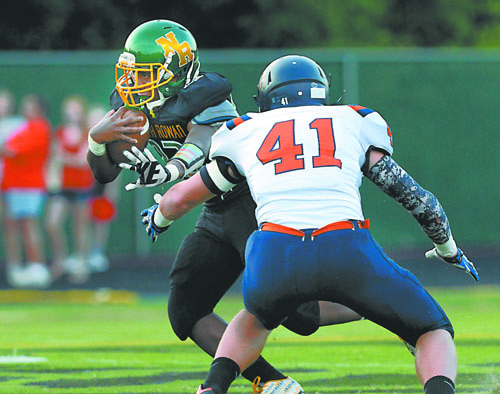 Carson's Ryan Bearden 41 moves in to make a tackle on North's Xavier Haley. photo by Wayne Hinshaw, for the Salisbury Post

CHINA GROVE — Friday’s outing at North Rowan was a highly unusual one for Carson, as the Cougars won a football game without putting on an offensive show.
Carson was out-rushed and out-passed and frequently lost battles at the line of scrimmage.
Still, Carson created five turnovers, blocked a punt and prevailed, 44-26 — on the road against a school that had beaten the Cougars three straight times.
“After a game like that you kind of ask yourself did they lose it or did we win it,” Carson coach Joe Pinyan said. “I really think our defense won it. I’m happy about that because all our defensive coaches and defensive players heard last season was how they weren’t very good.”
Carson gave up 100 points in the last two games of the regular season in 2014, a scary total that eliminated the Cougars from the 3A playoff picture.
On its way to a frustrating 4-7 mark, Carson lost 42-28, 43-37, 35-26 and 44-36, but maybe it’s a new day. A lot of young Cougars are now veteran Cougars, and any defense that includes linebacker Ryan Bearden (6-foot-3, 233 pounds) can’t be bad.
Bearden’s effort against North was epic. He blocked the punt. He recovered two fumbles. He intercepted a pass and nearly scored on the return.
It was a combination of Bearden playing sound fundamental defense and being a terrific athlete.
“Good things happened for me because my teammates played so well,” Bearden said.
Pinyan would like to rest Bearden on special teams, but he really can’t. There’s always a chance Bearden is going to make a game-changing play, and his first big moment Friday came on punt coverage late in the first quarter.
When the ball was knocked loose on a punt return, Bearden recovered at the North 42-yard line. That turnover provided the short field that led to Carson’s first touchdown and a 7-0 lead.
“That fumble was just a dogfight, with Matt Beaver and me at the bottom of the pile with some North guys and everybody pulling on the ball,” Bearden said. “I was lucky to come out of there with it.”
With the score 7-all, Bearden recovered another fumble. This one just skidded to him after a bobble in the North backfield, and Bearden fielded it like a shortstop at the North 32. That recovery set up the field goal by Cole Howard that put Carson ahead 10-7.
Bearden’s blocked punt came after Carson stopped North’s first possession of the second half.
“I went right through one of the tackles and never got touched,” Bearden said. “Then I blocked the ball right off the kicker’s foot.”
While Carson didn’t score directly off the blocked punt, the play dramatically changed field position. In addition, North kicker/punter Jacob Young was injured on the play, and that seriously damaged the Cavs’ chances the rest of the way.
Bearden’s biggest play was still to come. With North backed up at its 5-yard line and facing third-and-6, Bearden intercepted a pass, carried the ball to the 3-yard line and handed the Cougars first-and-goal. Carson then punched in the touchdown that provided a 24-14 lead.
“The linebacker on that side of the field blitzed and I was running across the field to cover for him when I saw the ball coming,” Bearden said.
Add it up, and Bearden played a huge role in 17 Carson points, so Pinyan wasn’t kidding when he said Carson’s defense won the game.
“Bearden did a great job of playing linebacker with his eyes,” Pinyan said. “He’s never going to be a rah-rah guy, but he’s still a leader. The rest of our guys feed off his ability.”
Besides a month’s worth of turnovers, Bearden had five solo tackles and four assists on Friday.
Not a bad start for a player expected to be among the county’s best.
“It’s kind of crazy to expect anyone to play like that, but he just did what he’s capable of,” Pinyan said.
Bearden was more interested in talking about Carson’s entire defense, rather than the amazing night he had personally.
“I’m very happy with our defense,” he said. “It shows what can happen when everybody buys in. When one guy messed up on Friday, someone else was there to back him up.”