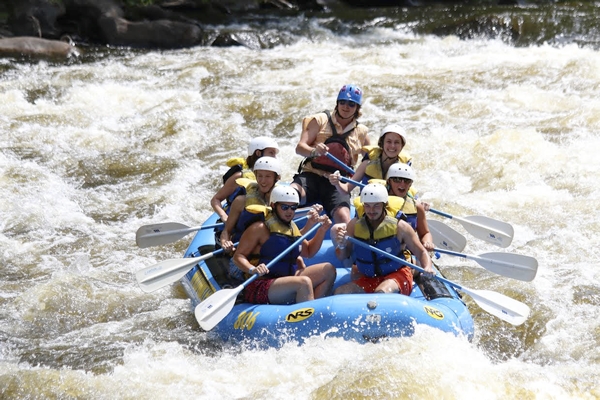 The Environmental Stewards at Catawba College went on retreat Aug. 21-23 at Lake Junaluska in western North Carolina to concentrate on team building and project planning. The Center for the Environment, which provides leadership training and guides the students as they work on their projects, hosted the event.

The Environmental Stewards Program is designed for students who are eager to get involved in campus sustainability projects or the Center for the Environment’s outreach efforts. Those who are selected for the program receive annual scholarships.

“We recognize that it is important to get the group together as soon as they get to the campus,” says Dr. John Wear, executive director of the Center for the Environment.

The purpose of the retreat was to begin building a cohesive team and to brainstorm ideas for projects that will be launched during the academic year. Incoming students were paired with upperclassmen, who serve as peer mentors.

“At the large-group discussion on the first day, the energy level was so high that we continued late into the evening,” says Wear. “These students are doers. They like to make things happen.”

Since everyone on the trip was interested in the environment, they bonded quickly. “Everyone just meshed really well together,” says Elizabeth Howard, a first-year Steward and sustainable business major from Mocksville.

The students talked about what they want to do and how they want to do it. “It was student-led,” Howard says. “Students who had been Environmental Stewards for a while would give us ideas and then we would run with them.”

They discussed different approaches, noting that they can work through other organizations like the Student Government Association, various clubs and even personal internships.

Howard introduced the Stewards to World Wide Opportunities on Organic Farms (WWOOF), an organization that links volunteers with organic farms and growers.

“It’s a nonprofit where you can sign up and offer your help to these farmers in exchange for the knowledge you gain,” she says. The farmers also provide food and accommodation for those who assist with the farm tasks.

Part of the retreat was a whitewater rafting trip. Howard explains that they navigated Class 3 rapids. “It had running water and rocks that made it more difficult than a stream, but it wasn’t too intense so there wasn’t any danger,” she says. “It was exciting.”

Payton Coleman, a freshman from Concord who attended the 2014 National Environmental Summit for High School Students at Catawba, says she is “super-excited” to be a part of the Environmental Stewards Program. “It’s a great opportunity not only because of the scholarship, but because I’m able to be in a leadership role as a freshman and to contribute to ideas for creating a better environment.”

An environmental studies major, Coleman is particularly interested in projects involving plants. “We want to have a plant sale for students so they can have their own plants in their rooms, which will help with air quality in the dorms,” she says.

She is also interested in a Teacher Appreciation project that involves giving teachers plants for their desks, hoping that will remind them to discuss environmental issues in their classes.

“It was great to get together with people who are interested in the same things I am,” Coleman says, “things that I want to pursue for the rest of my life.”

Today is a bittersweet day for me. After more than a year and a half of covering education in Rowan... read more