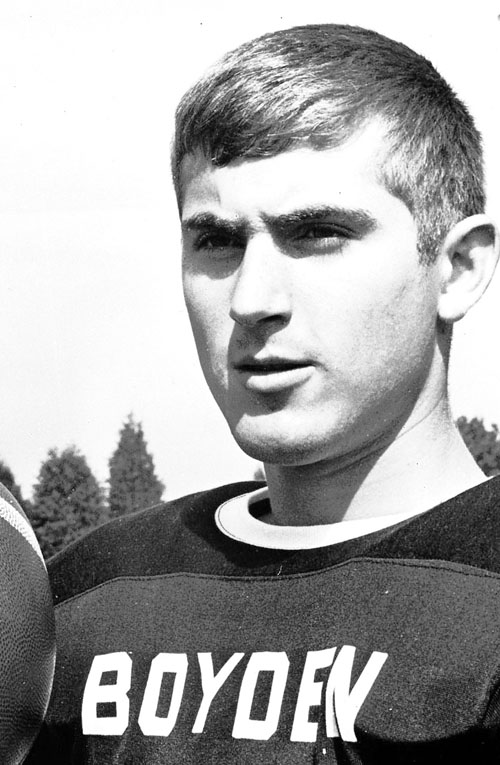 Bill Leonard in his Boyden days.

Bill Leonard died at his Salisbury home on Wednesday, following an extended illness.

Leonard was a good baseball and basketball player, although he’s most remembered for his prowess as coach Pete Stout’s option quarterback in 1966 and 1967.

Boyden, which evolved into Salisbury High in 1971, started a streak against Rowan County opponents on Sept. 17, 1965, and kept that undefeated string going until Sept. 24, 1977. Boyden and Salisbury teams went 29-0-2 in that period, and Leonard was a big part of that.

Leonard was an elusive runner. When he was featured as a Salisbury Post “Friday Night Legend” in 2007, he offered a simple explanation for that elusiveness.

He was taught how to punt by his uncle, Ken Owen, one of the all-time greats in Rowan County.

Leonard was promoted to the Boyden varsity in 1965 as a sophomore to punt, and he proved to be tremendous at that position. His 43-yard average as a senior remains the county standard for a season.

As a senior in the fall of 1967, Leonard scored all three Boyden TDs in a 19-0 win against Albemarle and he ran for the game-winning score against North Rowan.

Stout coached the West squad in the East-West All-Star Game in the summer of 1968 and selected Leonard, who was headed to Duke on a football scholarship, and A.L. Brown’s Dan Dayvault as his quarterbacks.

In the game, Dayvault played quarterback, while Leonard moved to defensive back. Leonard suffered a career-changing injury that night when he jammed his hand into the ground, blocking for a teammate who had intercepted a pass. He broke his wrist and all the bones on the back of his hand.

His hand healed, but his throwing accuracy was gone forever.

“I was throwing curveballs,” is how he described his passing when interviewed in 2007.

Looking back 40 years later on that fateful East-West All-Star Game, Leonard wasn’t bitter. He always was convinced that terrible injury happened for a reason and a higher purpose.

“Getting hurt — that was just God looking out for me,” Leonard said.

The injury led to him leaving Duke and returning home to Catawba as a punter. Returning to his hometown led him to getting married to his sweetheart, Mary, settling in Salisbury and entering the family business — Owen-Leonard Heating and Air Conditioning.

Leonard had another love — tennis. In addition to playing until his illness began, Leonard served as a part-time assistant coach for Catawba College tennis teams, both men and women for more than a decade. He was a tremendous asset for Catawba head coach Jeff Childress.

“Bill was a tremendous help at Catawba,” said Childress. “He put a lot of time in at practices and matches, working individually with our players and he really enjoyed it.

“He really made a difference that is going to last a very long time for the players that knew him,” added Childress.

Bill and Mary Leonard’s daughter, Natalie, played tennis at Salisbury High during the 1990s. Their son, Nate, was on the Hornets’ baseball team.

Summersett Funeral Home is serving the family and services have not yet been announced.