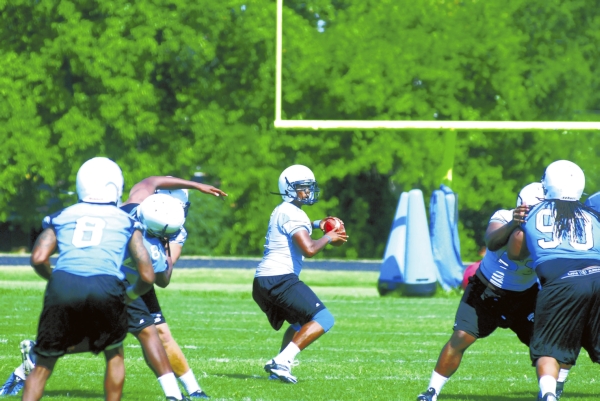 Wayne Hinshaw/for the Salisbury Post Above: Carson’s Elena Turnbull (7) is on the attack at the net as Robinson’s Jessi Koerner (5) and Brystal Hartman (10) attempt to block. Carson’s Morgan Hester and Kaytee Leonguerrero (5) are also at the net. The Cougars won the match in three straight sets.

There was a lot of talk about turnovers at Livingstone’s first football press conference on Monday and head coach Daryl Williams wasn’t referring to the apple variety.

The Blue Bears went 5-5 last season and averaged 32 points per game on offense, second only to Winston-Salem State’s average of nearly 36. That’s the good news.

The bad news was that the Blue Bears led the CIAA in turnovers with 18 lost fumbles and 14 interceptions. That total of 32 ranked among the worst in NCAA Division II as well. It continued to put the defense in no-win situations.

“There was only so much that the defense could do,” said Williams, now in his third year at the helm. “To turn the corner this year, like we want to do, we cannot have turnovers. It was a lack of conditioning and focus and that’s on me. It’s up to me to make sure we improve in the turnover department.”

Livingstone opens this Saturday in Columbia, S.C., battling Benedict in the Palmetto Capital City Classic at 4:30. The game will be televised on ASPIRE Network, channel 185 on Time Warner Cable.

Williams said that he doesn’t know much about Benedict, but he knows and respects its coaching staff. “Not taking away from their team, but my main concern is our team, not turning the ball over and playing sound in all three phases of the game,” he said. “If we don’t turn the ball over, I like our chances.

“We’re extremely excited about playing in the classic,” continued Williams. “It will be fun for our guys to have a chance to play on TV. And we get to see how we measure up. We’ve got a new group of guys on defense that we can’t wait to see play.”

Several transfers were brought in to shore up a defense that allowed 34 points per game in 2014. Defensive linemen Kameron Nightingale and Patrick Webb, and linebackers Danny Robinson and Demarcus Nolan will add instant experience. “We added a bunch of older guys to secure up our defense and we scaled back some on what we were putting in defensively,” added Williams. “We want to be sound but put a little more pressure on the quarterback.”

Of course, the offense has proven that it can score and put up the yardage. Livingstone’s multiple “hobo — high octane, big offense,” as Williams calls it, has three key components returning.

Hendricks, from Nashville, N.C., was the CIAA Offensive Player of the Year in 2014 and both he and Powell were first team all-conference selections. Hendricks had 71 catches for 1,070 yards and 12 touchdowns — in just eight games. Powell averaged 224 yards passing per game and threw 24 TD strikes.

Powell, from upper Marlboro, Md., has been a mainstay since he walked onto the Monroe Street campus four years ago. If the Blue Bears are going to have their first winning season in 17 years, Powell will have a lot to do with it.

“I feel like I just walked in the door, so I can’t believe that it’s already my senior year,” said Powell. “It’s a blessing to be here and I definitely feel that our time has come. We have the guys in the locker room to do it, the team chemistry is there. It’s now or never so that’s how we going to attack the season and try to make it happen.”

Powell has matured from hard work in film study, saying that leadership is what he has worked on the most since his freshman sophomore days.

“It’s on us to win,” continued Powell. “We’re not hoping to win, we know we can and we’ve got people in our corner who expect us to get it done this year. It’s time to live up to the expectations. It’s always fun to play football and get away from regular life for those three hours, but the goals this year are a winning season and a CIAA championship.”

Williams said that the Blue Bears are about ready, came through preseason practice mostly healthy and this week, is continuing to work on conditioning and substitution patterns — basically fine tuning.

“The strength of this team is the team,” said Williams. “We’re going to need everybody. We’re going to be well-disciplined and work at doing things the right way. We’ve talked about reps and we’ve had reps. Now, it’s time to execute.”

Livingstone will again be on the road next week at Virginia University of Lynchburg, before the home opener at Alumni Stadium on Sept. 19 (1:00) against Central International, another school in Lynchburg.