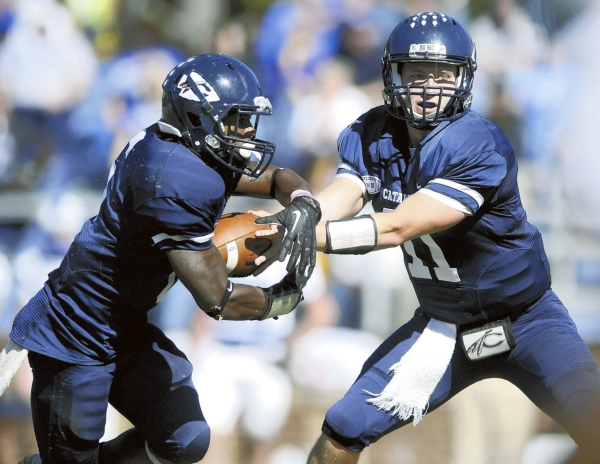 Catawba opens the football season at home at 1:30 p.m. on Saturday against fourth-ranked West Georgia, and the most excited member of the Indians’ roster might be a second-team guard.
That would be Carson graduate Christopher Joel “C.J.” Cain, a 6-foot-5, 300-pound China Grove native who has been preparing diligently for his first meaningful action on the offensive line.
Cain, a sophomore, will be on the field whenever senior right guard Tim Pangburn needs a break.
“Playing a highly ranked team right off, it’s a chance for us to see exactly where we’re at,” Cain said. “I know I’m as excited as anyone.”
Cain was recruited by the previous Catawba staff, mostly by offensive line coach Brian Hinson. Hinson is one of the handful of links from the tenure of former coach Chip Hester to the current staff headed by Curtis Walker.
Hinson liked Cain’s size and potential, although Catawba didn’t have scholarship money to offer.
“Catawba had been looking at me for a while, and Coach Hinson kept talking to me after National Signing Day passed,” Cain said. “I came to Catawba as a preferred walk-on, but I still had hopes of contributing right away.”
That didn’t happen. Walker recognized Cain had a long way to go if he was going to dent the depth chart for a program with aspirations of winning championships.
“Coach Walker saw me that first year as a practice guy, a developmental guy,” Cain said.
So Cain spent the 2013 season as a redshirt.
“C.J. was big, but he was raw as a lump of clay,” Walker said. “But he accepted coaching and he allowed us to mold him into a much better player than he was when he first came here. His footwork got better. His strength got better.”
Cain traveled and practiced, but his most serious contributions his redshirt year came with the “Devo” team — the unit giving Catawba’s first-team defense a look at the plays the next opponent would be running.
“I didn’t play, but I was happy that we won and I remember traveling to Carson-Newman and how great it felt to win there,” Cain said. “I learned the proper steps to take and I learned the playbook. The older guys — Taylor Fender, Lewis McCormick, Tim Buck, Pangburn — were great about keeping me involved, making me feel like I was part of the team.”
Cain made enough progress that he played in four games as a redshirt freshman in 2014, although his playing time basically came in games already decided. Playing right tackle, he had four knockdowns in the romp against Davidson early last season.
“I’ve learned a lot since I came here,” Cain said. “It takes a while to learn to practice the right way and to practice the way coaches want you to practice.”
Cain got down to 275 pounds at one point, but now he’s built himself back up to 300.
“It’s good, healthy weight,” Cain said. “My size isn’t much different now than my freshman year, but I’ve gotten a lot stronger and a lot more athletic.”
Walker had plenty of praise for Cain, not just for his strides on the football field, but for his work in the community and his growth as a student.
“He’s embraced college life and he’s gotten better in every aspect,” Walker said.
Cain’s biggest football adjustment has been developing as a pass-blocker. He didn’t do a lot of that at Carson, where he played for teams that relied on the running game. He’s had a good teacher in Hinson, an All-America offensive lineman in his playing days at Catawba.
Cain turned 20 on Aug. 25. His late birthday present will be delivered on Saturday — the challenge of competing against one of the best teams in Division II.
“C.J. will get some time,” Walker said. “He’s worked for it and he’s earned it. We appreciate the kind of effort he’s put in.”