City, county to Little Leaguers: ‘Thank you from the bottom of our hearts’ 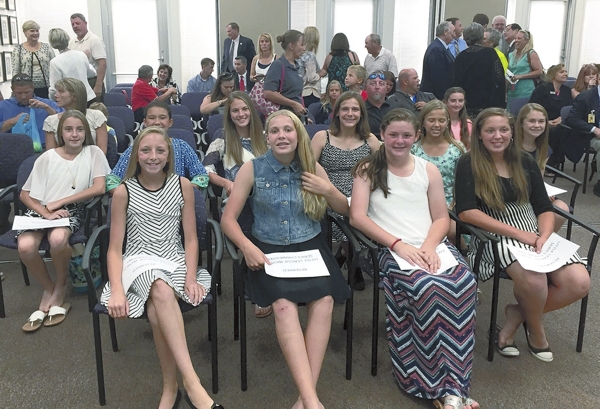 Members of the Little League Softball World Series championship team from Rowan County wait for proceedings to start Tuesday at City Hall, where they were honored by both Salisbury City Council and the Rowan County Board of Commissioners. Photo courtesy of Kelly Baker

SALISBURY — They hit. They pitched. They defended. They showed grace, sportsmanship and generosity. They put us on the map. They even brought together city and county officials.

Is there anything these Rowan County Little League Softball girls — 2015 World Series Champions — can’t do?

“Thank you from the bottom of our hearts,” Salisbury City Councilman Brian Miller told the 13 team members Tuesday, when council members and Rowan County commissioners sat together in City Hall, praising the girls, reading proclamations and shaking their hands.

Mayor Paul Woodson called it a historic day, not only because of the Little League Championship but because the boards, often at odds in years past, were meeting together and getting along.

Greg Edds, chairman of the Board of Commissioners,  said it was a good day for the city and county, and officials hoped to continue working toward “a mutually beneficial beginning.”

But Edds wanted the championship team to know one thing: “If it happens again, you’re coming to our place.”

Their coaches were Steve Yang, Rob Hales and Eric Dowling.

The Rowan team had a sterling run in winning the District 2, North Carolina and Southeast  Region championship on its way to the World Series, where it compiled a 5-1 record on the way to winning it all. Its last two games were televised nationally on ESPN 2.

Edds said it’s no secret Rowan County has struggled lately economically, while local government officials try to place the county and its municipalities in the right position “to prosper in every way.”

What the Little Leaguers did in just nine days was amazing, Edds said, because the county could have spent $20 million trying to promote itself all across the country and not have gotten the same positive results fostered by the team.

City Councilwoman Karen Alexander said she was proud of the girls’ sportsmanship, athletic abilities and the generosity they showed to an under-equipped team from Uganda. Alexander said it spoke volumes and was a great representation of the community.

Commissioner Mike Caskey said the team was a great ambassador for the county. Commissioner Jim Greene told the girls he was proud of the way they handled themselves and, he joked, how they controlled their parents.

Councilman William “Pete” Kennedy recalled he was a senior guidance counselor at East Rowan High School when Steve Yang was a student there, and he followed Yang’s career since then. “Congratulations, Steve, I’m proud of you,” Kennedy said.

The room full of parents, fans and friends applauded at least a half dozen times as the girls were honored. Each received a proclamation from the county that cited their “astonishing efforts and incredible athleticism.”

It also said the girls were “a source of admiration and inspiration to the youth and citizens of Rowan County.”

Woodson told the girls they were role models now, and that comes with a lot of responsibility.

“People are going to look up to you all,” he said.

Before everyone went to a reception outside of hot dogs and Cheerwine, the city showed video highlights of the girls’ World Series win. Several members of the Rowan-Salisbury Board of Education and Superintendent Lynn Moody also were in attendance.

Dan Wales, head of the Rowan Little League, has procured two World Series jerseys, one each for the city and county. The city will frame its jersey and hang it at City Hall. The county will do the same at the Rowan County Administration Building.