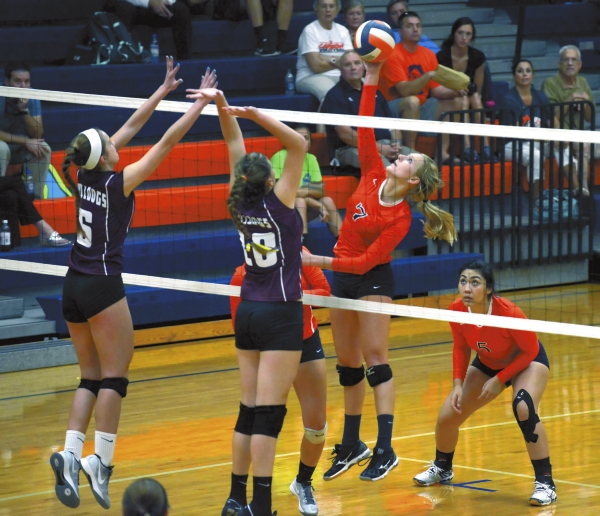 Wayne Hinshaw/for the Salisbury Post ... Carson’s Elena Turnbull (7) is on the attack at the net as Robinson’s Jessi Koerner (5) and Brystal Hartman (10) attempt to block. Carson’s Morgan Hester and Kaytee Leonguerrero (5) are also at the net. The Cougars won the match in three straight sets.

CHINA GROVE — After seasons of 31-4 and 34-1, and two 3A state runner-up plaques, Carson’s 17-10 season in 2014 gave coach Kelan Rogers sleepless nights.
Even after graduating three franchise players, he was disappointed that last season ended with a loss in the SPC tournament final, followed by a setback in the first round of the 3A state playoffs.
“I thought we were better than we played,” said Rogers who is 154-40 since taking over as Carson’s coach in 2009. “But injuries were part of what happened last year and inexperience was part of it. Now we’re a year older and a year better and we’re a lot deeper. I like my team.”
When Rogers likes his team, look out. Early in 2012 he said his team had the potential to be “nasty,” and we all know what happened in 2012 — and 2013.
The Cougars (6-0, 3-0 South Piedmont Conference) looked serious on Tuesday for this early in the season and pounded visiting Jay M. Robinson 25-14, 25-11 and 25-7. Robinson’s Bulldogs were 2-0 in the SPC coming in.
The most experienced returners for Carson are seniors Morgan Hester and Jordan Osborne and junior Elena Turnbull. Returners who have improved by leaps and bounds include sophomore middle blocker Lindsay Elmore and junior outside hitter McKenna Moose.
The addition of springy freshman outside hitter Mallory Weast to Carson’s lineup has allowed Osborne to return to her natural libero position. That has helped Carson’s defense.
“They needed me to hit last year, but I’ve always looked at defense as my strength,” Osborne said. “I can help the team more at libero.”
Turnbull was one of the county’s best players a year ago even when she was battling a shoulder injury, and now she’s feeling 100 percent.
“You could see the way she was swinging today that she’s a different player, a healthier player than last year,” Rogers said.
Hester, who started as a youngster for the Cougars on two Western Regional champions, is as good as ever, a versatile player who combines setting, passing and hitting skills.
“We’re a very close team,” Hester said. “We’ve played well so far, and I believe we’re going to be a very good team.”
Weast led the Cougars with 13 kills on Tuesday, including six in the first set. Turnbull had seven kills and five aces. Moose had five kills. Elmore had seven solo blocks and was part of three combo blocks.
Carson’s start wasn’t pretty, and Robinson took a 6-2 lead in the opening minutes after a flurry of Carson missed serves and unforced errors.
But then Weast served for seven straight points, as the Cougars grabbed control of the set and the match.
Sara Boyd’s crosscourt set to Weast was a thing of beauty and put the Cougars up 20-13. A spectacular dig by Osborne led to another kill by Weast for 22-14. Then Hester clinched the the opening set with a kill.
Carson led all the way in the second set after Turnbull started things off with three quick aces. A nice dink by Kaytee Leonguerrero made it 24-11, and Hester set up Moose for the kill that ended the set.
“We’re pretty strong,” Turnbull said. “We played with a lot of energy today and a lot of people played very well. We’re excited about what we can do.”
Turnbull again got the Cougars rolling with her athletic serves in the third set, and Weast enjoyed another strong run at the service line to push the Cougars’ lead to 14-2.
“Weast is a solid player and she can really jump,” Turnbull said.
Rogers poured reserves into the action in the third set, and Hester set up Madison Barnhardt for the kill that ended match.
Cox Mill beat the Cougars three times by 3-1 scores in 2014 and is predicted to repeat as SPC champs, but a rejuvenated Carson squad could make things interesting.
“We’ve got really talented kids,” Rogers said. “We’ll just have to see what happens.”