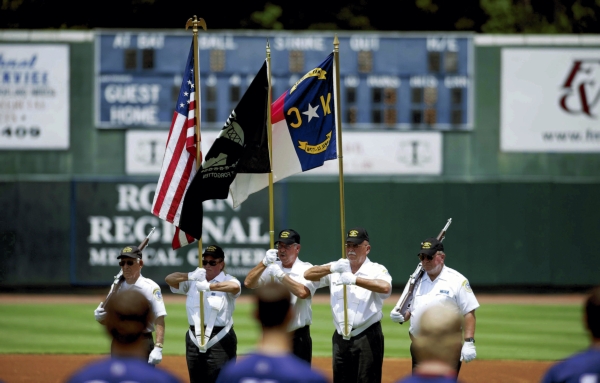 The Rowan County Veterans Honor Guard posted the colors for every game during the N.C. State Legion baseball tournament at Catawba College in July. This week, the honor guard traveled to Baltimore and won the national championship at the American Legion National Convention. Jon C. Lakey/Salisbury Post file photo “We probably haven’t hit the ground quite yet,” Craddock said during a stop Monday afternoon at Arlington National Cemetery.

Last year, the Rowan County Honor Guard placed fourth in the same competition at the American Legion Convention in Charlotte. In winning the title this year, the Rowan unit topped a Texas team which had won it six years in a row.

“As they announced it,” Craddock said, “you’re sitting there sweating bullets.”

After judges announced the second-place team and it wasn’t Rowan, meaning Rowan would be first, Craddock said he started beating the guy next to him on the back.

A lot of hugs, and even tears, followed.

“It was quite an emotional time for us,” Craddock said.

Among other duties, the all-volunteer Rowan County Veterans Honor Guard provides military honors at veterans funerals, including those at the Salisbury National Cemetery. It presents the colors at many other events and functions, and Craddock said the Honor Guard is involved in more than 300 ceremonies a year.

In preparation for the National American Legion Convention, the Honor Guard unit practiced about 75 hours.

Cauble also is commander of the Rowan County Honor Guard.

Overall, 12 people associated with the Honor Guard were in the group that traveled to Baltimore. “We have it on film, and we have it on video,” Craddock said. “The guy was so excited when we won the camera went to the ceiling.”

Craddock added that the process was nerve-wracking, as the Honor Guard unit had to stand in line at military parade rest waiting for the judges to call out the names of the units, their points and demerits.

The group traveled to Baltimore together in a van, leaving last Thursday. They were scheduled to get home Monday night.

The winning Rowan County Veterans Honor Guard is scheduled to be at Thelma’s restaurant at 9 a.m. today to celebrate with other veterans at the regular Tuesday coffee gathering.

“We have had a lot of support and supporters,” Craddock said.

Next year, the National American Legion Convention will be in Cincinnati, and legion officials already have asked the Rowan County Veterans Honor Guard to defend its title.

“It was quite an accomplishment,” Craddock said.

A quilt hanging at the Hefner VA Medical Center honors veterans who have passed through its program to treat combat-related... read more