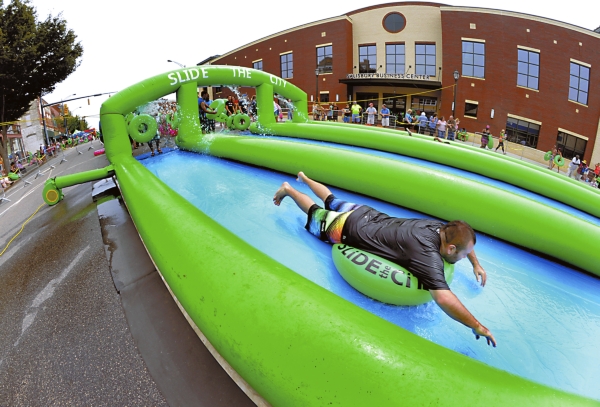 The slide started in from of the Salisbury Business Center at the corner of Bank andS. Main Street .The "Slide the City" water event sponsored by the Downtown Salisibury Association. photo by Wayne Hinshaw, for the Salisbury Post

SALISBURY — With their special wristbands and adventurous spirits, Cale Spenard and the rest of his crew planned to get in as many slides as possible Saturday.

“We like action sports — and this is a sport,” Spenard said.

Spenard, his wife, Christine, and their friends Jesse Hutton and Kristen McGloin joined more than 1,500 others Saturday as Slide the City — a 1,000-foot-long water slide — came to Salisbury.

Participants slid, slipped, twirled, spun and bounced off the sides of three lanes that extended down South Main Street from Bank to Monroe streets. The long, green structure, much like a giant Slip ‘N Slide, also seemed to wriggle down South Main Street like a serpent with giggling, screaming people inside.

In other words, Salisbury had its own Green Monster Saturday.

“The right lane’s getting pretty good,” Hutton reported after he had gone down at least a half-dozen times Saturday morning.

To help themselves keep going, sliders were applying baby oil to the bottoms of their inner tubes.

The event was sponsored by Downtown Salisbury Inc., and tickets purchased for Winston-Salem’s Slide the City, which was canceled earlier this summer because of low ticket sales, were honored in Salisbury.

Several people interviewed Saturday morning came from places such as Winston-Salem, Burlington, Concord, Cornelius and Troy. The 200 block of South Main Street also was closed so vendors could off sell food and drinks. Bounce City also set up a bounce house for kids who were too young and too short to be allowed on the giant street slide.

Many parents and grandparents, if they weren’t sliding, set up camp on the sidewalks and watched their children slide all day, but Slide the City wasn’t just for kids.

Hutton and his friends had bought a “super slide” package that came with a hat, T-shirt, inner tube, mouth guard and even temporary tattoos. Many people also were carrying waterproof Slide the City backpacks.

“It was good,” Paige Johnson of Concord said of her first run in the morning. “A couple of lumps, but I’m sure they’ll work them out.”

Johnson and her husband, Ross, just came for a day’s entertainment.

Jennifer Mason, a Rowan County Sheriff’s Office deputy, was waiting in line to make her third slide down the street Saturday morning. Her second trip had gone better than the stops and starts of the first run.

“The baby oil is the trick,” she said, “and knowing how to go down.”

She laughed and said the slide should be part of the physical training aspect for deputies. Mason’s 10-year-old son, Bryce, was wearing a GoPro camera to capture some of his runs. Others were even seen sliding down with Selfie Sticks out in front of them.

Dylan Schlappich, 11, and his sister, Braelyn, 7, reported after two runs that the bottom of the slide seemed to be the fastest.

Marion J. Greene, a retired 53-year-old Army paratrooper, drove to Salisbury from Troy Saturday to try out Slide the City. She’s always looking for a new adventure, she said.

“It was sent to me on Facebook,” Greene said. “I missed it in Raleigh.”

Greene, a 1984 Catawba College graduate, arrived early, registered and was waiting for her 2 p.m. “wave time.”  “I told my Mama I’d get some pictures,” she said.

Greene purchased the $10 “single slider” in a special early offer. She also had to pay $8 for an inner tube.

Salisbury’s Judy Ballard, her son, Alex, and their friend Tori Wishon of Concord were trying to do as many slides as possible in their wave window, which lasted until 2 p.m.

“It was fun,” Ballard said of an early run, when the three lanes still needed a bit more water. “Once you get going, it’s pretty awesome.”

The Ballards and Wishon did a lot of pushing and bouncing off each other as they traveled down the slide. They also had purchased a super slide package, and Ballard said that’s the way to go.

Jennifer Hands and Jeff Applewhite were among the many volunteers who arrived at 6 a.m. to help with the setup. Overnight, employees associated with Slide the City put 12 to 14 of the tube-like sections of the slide in place.

“This is good for the city,” Applewhite said.

The volunteers were given a chance to make the inaugural run on the slide around 10 a.m. Saturday’s Slide the City was open until 7 p.m.

Hands reported getting stuck several places on the first run because it wasn’t wet enough yet. Donald Tucker said the city should have parked its fire trucks on both sides of the slide, brought out their hoses and flushed people down South Main Street.

“My shoulders are going to kill me tomorrow,” one man said, walking back up the hill on South Main Street before going again.

Joe and Christina Kaemmerlen came with their three children, but only 7-year-old Isabelle was big enough and old enough to make the slides with her father. “If you get to run and dive, it’s better,” Joe said.

The sliders had their strategies and came to like a certain lane over the others. Madison Leigh Suehr, 11, of Spencer preferred the right lane. Her friend, Rachel Adams of Winston-Salem, said the center lane was her favorite.

“I had a good time,” Adams said of her early runs, and both girls said their trips were better as long as the baby oil didn’t wear off.