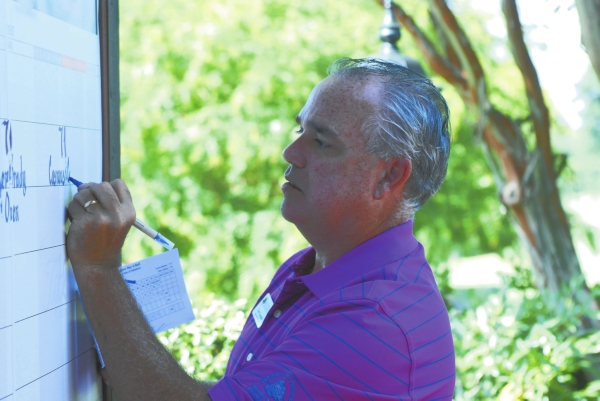 As the Crowder/Dorsett Labor Day 4-Ball Tournament works its way through qualifying this weekend, Chad Campbell, head golf professional at the Country Club of Salisbury, is starting to really feel at home.

Campbell, who spent 20 years at Pinehurst Resort in various roles, came to Salisbury in February from a nine-month stint as director of golf at Dorado Beach, Puerto Rico.

Campbell and his family enjoyed their brief time in Puerto Rico but found that living on an island was very different from the sand hills of North Carolina. “Our refrigerator went out and it took six weeks to get it repaired,” remembers Campbell with a chuckle. And you don’t even want to hear about the cost of living there.

At Salisbury’s country club, Campbell is experiencing a busy but somewhat “normal” pace, which he welcomes whole-heartedly.

“I am very happy to be in Salisbury,” said Campbell.  “It is very different from some of my past experiences, but it’s also very refreshing, because I get to be a golf pro again. I’m not managing 200 people, so I get to have those one-on-one relationships. I get to meet people face-to-face and get to know the great members here.”

Campbell began at Pinehurst in 1997 as head pro of the No. 6 course there. During his last nearly four years there, Campbell was director of golf over Pinehurst’s eight courses.

So he’s going back to his roots.

“Here, I now have the time to teach quite a bit and I’ve even gotten to play a little golf too, which didn’t happen so much in the past,” explained Campbell. “It’s been good. The people here have been fantastic in welcoming me into the country club family.”

At Pinehurst, as director of golf operations, Campbell managed a $15 million budget and developed and led the member tournament program, executing over 50 member events annually.

Campbell attended Tarleton State University in Texas, graduating in 1989. He was a four-year letterman in golf and qualified for the NAIA National Championships as a senior. Campbell was also a member of the TIAA All-Academic Golf team and received the John Tarleton Presidential Service Award.

The first three years of his career after school were spent at several golf clubs in Texas. He came to North Carolina in 1994, starting at Pinehurst as a teaching professional and assistant golf professional.

In 1998, for a short time, Campbell was club manager at Pinewild Country Club, before taking the position with Pinehurst No. 6.

Campbell has been a member of the PGA of America since September 1995.

Again, as the Labor Day tournament, the “grand daddy” of Rowan County’s golf events, is played next weekend, Campbell is looking forward to the future in Salisbury.

“This is really a unique place, a multi-generational club, with a long standing and rich history,” said Campbell. “Many of these people, their grandparents were members here. They’re walking down the halls and showing me pictures on the wall of their great-grandfathers — so it’s a neat place to be a part of.”

Campbell believes that his experiences at Pinehurst, including two U.S. Opens (1999 and 2005), can only help in his new position.

“From being in Pinehurst for 20 years, I know what history means to a club, and how to grow that and how to take advantage of that,” he said. “The hard part is embracing those traditions and carrying them forward, and making them relevant in the club environment of today.”

Perennial contenders Ryan Honeycutt and Keith Dorsett combined for a 65 yesterday, followed by two 68s — turned in by the teams of Josh Brincefield-Eric Mulkey and Chris Williams-Michael Swaringen.

Frederick Corriher and Christopher McCoy (1994 champions) carded a 69 on Friday, as did David Miller and Clay Kilgore. On Saturday, those two teams were joined at 69 by Drue Davis-Derek Lipe, Stephen Carroll-Walker Cress, and Nick Lyerly-Michael Dorsett.

Cress is a James Madison University golf commit, while Carroll is a Concord High School standout who has played in a lot of local tournaments this summer.

Lyerly, a rising junior at East Rowan High School, has had a huge spring and summer, winning the state 3A championship, the Horace Billings Rowan Amateur and the Rowan Junior Amateur Open.

See all results and today’s tee times in Scoreboard on page 2B.