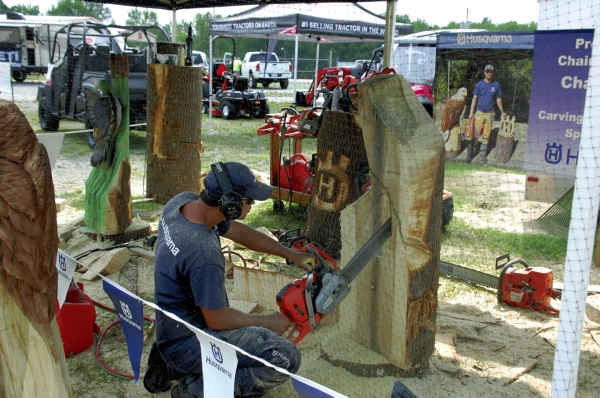 Mark Wineka/Salisbury Post Chad Gainey starts carving out an eagle from a piece of poplar. Gainey was giving demonstrations Saturday at the Fin, Feather & Fur Outdoor and Offroad Expo at the Rowan County Fairgrounds.

SALISBURY — When you have a three-day event devoted to fishing, hunting, mud racing and even a demolition derby, you see about anything — from chainsaw carvers to monster trucks.

The second annual Fin, Feather & Fur Outdoor and Offroad Expo winds up today at the Rowan County Fairgrounds. Today’s hours are from 10 a.m. to 5 p.m., and the featured event is a 1 p.m. full-throttle Demolition Derby.

“People of Rowan County have been begging for a demolition derby,” said the expo’s organizer, Garrett Barger.

While Friday night was more for local competitors, Saturday night brought in professionals from as far away as West Virginia, Barger said.

Organizations on hand include the National Rifle Association, Tom Siple Foundation, Delta Waterfowl and the N.C. Wildlife Resource Commission, which among other things was promoting its upcoming hunter education classes.

Another large exhibition building is dedicated to 3D archery, which also offers cash and prizes to the top shooters. Food vendors also are on the midway.

For many years, Barger, a sergeant with the N.C. Highway Patrol, helped a friend with the Big Buck Express, a similar hunting and fishing exposition in Greensboro.

When the Greensboro event closed down, Barger said he didn’t want to see this region without that kind of exposition.

“I wanted to start something here in Rowan County,” Barger said. “It seemed like the right fit.”

He also looked to expand the exposition to include the off-road, mud-racing aspect.

His father, Randall Barger, is the fairgrounds’ events coordinator/grounds manager, who handles the bookings. Again, the fairgrounds seemed to be a good fit for the exposition, especially with the new Ritchie Foundation building.

Garrett Barger said that while he is good at planning events, he could never pull off the exposition without the operational help of his father and experienced men such as Wilson and Cisco.

One of the guest demonstrators Saturday was chainsaw carver Chad Gainey of Panama City, Fla. In about 45 minutes, Gainey can take a piece of soft wood and carve out attractive sculptures of fish, eagles, owls, deer, bears, turkeys and other creatures.

For his 3 p.m. demonstration Saturday, Gainey carved an eagle from a big block of poplar. He tries to keep everything less than an hour on the demonstrations. Eagles come easy, he said.

“It’s pretty much kind of on auto-pilot,” Gainey added before starting up his biggest chainsaw.

This chainsaw carving started out as a hobby about four years ago, but his reputation spread quickly, and now Gainey is sponsored by Husqvarna and does shows and demonstrations up and down the East Coast.

His wife was making and selling candles at a local farmers’ market, and Gainey wanted to create something to go with her wares. He started carving Tiki heads with his chainsaw and went from there.

Gainey has carved out something as big as a 7.5-foot sasquatch, and he often is asked to carve on-site sculptures in private yards and golf courses. He recently did some otter sculptures for a golf course in Leesburg, Fla.

For the final details, especially around the faces of his sculptures, Gainey will use some smaller tools. The kind of eagle he sculpted with his chainsaw Saturday sells for $525.

As Gainey works, he creates a small mountain of sawdust. He wears noise-blocking headphones, goggles and chainsaw protection pants that include Kevlar.

Inside the Ritchie Foundation Building, David A. Lawerence, 18, was demonstrating some of his skills as a carver of duck decoys. In Ocean City, Md., in April, Lawrence won the junior world championship in decoy carving.

A competition decoy takes him a good 12 hours to carve and detail. Lawrence says the decoy has to be correct anatomically, besides having the colors right. It also is judged on how it floats.

“If you’re throwing them out in the water, they need to correct themselves,” said Lawrence, who is carrying on an artistic, decoy- carving tradition in his family.

His father, Corey, has been chosen as the Ducks Unlimited artist for 2016. Corey’s father started the decoy carving guild in Carteret County, where the family’s Bad Duck business is located.

David Lawrence carves his decoys out of juniper or tupelo, a gummy wood that, like cypress, is found in swamps. He started carving about five years ago, and he said it takes patience — something most guys his age don’t have.

“It just kind of fell into place,” Lawrence said of this decoy-carving pastime. “It just comes pretty natural.”