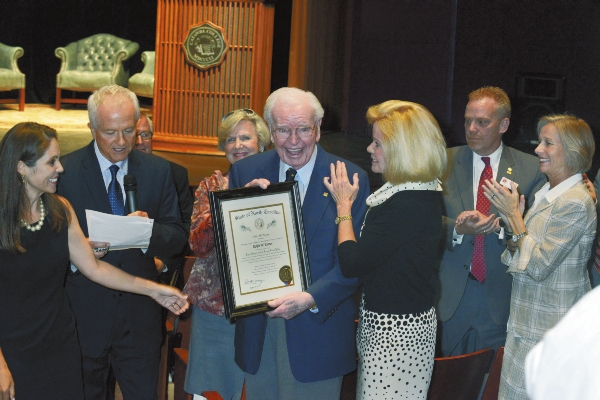 Ralph Ketner received the Order of the Long Leaf Pine from the governor at the premier of a documentary on Ketner’s life. Left to right: video producer Cherri Knorr Foster, alumnus and emcee Joey Popp, Ralph Ketner and daughter Linda Ketner. Food Lion started as Food Town in Salisbury in 1957.

The success of Ralph Ketner, Food Lion and the Salisbury community are tightly intertwined. That’s no news to longtime Salisbury residents, but the dynamic relationship comes into sharp focus in the video about Ketner’s life that premiered at Catawba College Thursday night.

Produced through a partnership between Food Lion and Catawba, “Lessons in Leadership” tells an inspiring story. Ketner lost both parents by age 11, but he had already absorbed their work ethic and integrity, and he possessed an uncanny knack for numbers.

Ketner, brother Brown and friend Wilson Smith founded Food Town in 1957. The business struggled for several years, trying countless ways to attract customers, from giving gas coupons to sending customers flowers. (But they did not sell overalls; you’ll have to see the video to learn the significance of that.) Then the mathematically minded Ketner hit on the dramatic price-cutting approach that became the chain’s hallmark — delivering the Lowest Food Prices in North Carolina, LFPINC. Sales took off. Ketner figured out a formula for success that has since been emulated by the likes of Walmart and Costco: five fast pennies instead of one slow nickel. And he instilled it in thousands of Rowan County employees who grew up hearing the Food Lion story.

Part of Food Lion’s success was the top managers’ willingness to take risks and experiment, dropping what didn’t work and keeping what did. Investors, employees and customers prospered by plugging into the Food Lion phenomenon, and no where more than in Salisbury. From Rowan Helping Ministries to the Plaza and Catawba College, Ketner invested his good fortune back into the community, and Food Lion’s Midas touch enabled others to do the same. Salisbury-Rowan is deeply appreciative of Ralph Ketner and Food Lion.

Food Lion is helping to distribute “Lessons in Leadership” to area schools along with a curriculum written by local teachers. Let’s hope the material inspires another young person from humble beginnings to think big, take a chance and crack the code of success.

Thank you, Food Lion and Catawba College, for documenting the unique life of Ralph Ketner. He is one of a kind — as his daughter said, “bound and determined like a freight train.” Spurred by Ketner’s drive, ingenuity and generosity, Food Lion and Salisbury-Rowan share an amazing history. That’s a strong foundation on which we can build, together.