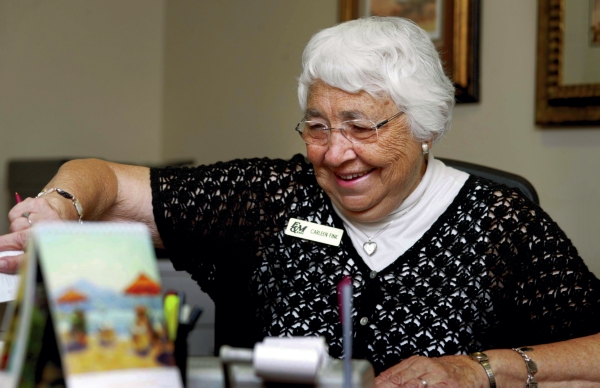 You might think banking is about money, and deposits, and accounts, and investments. And you’d be right. But what banking is really about is relationships.

With 55 years in the business, Daisy Fink has built many relationships.

But, she says, “I can’t leave this place and leave these folks. It’s just like family.”

Daisy’s given name is Carleen, but she’ll answer to either. Paul has yet another idea for a name.

“Daisy’s middle name ought to have been Service,” he says. “She has honed that skill to an extent that it has become her trademark at F&M, and it has become the benchmark by which we measure the service level of all of our F&M teammates.”

“Daisy is an institution at F&M,” he says. “She not only set the customer service standard for our company for the last 55 years, she IS the standard. Our outstanding service quality award, given annually at our awards banquet, bears her name. Her passion for people and service burns as brightly today as it did 55 years ago.”

Daisy works about 15 hours at the cozy office, tucked in a corner near the dining room. The branch is open 10 a.m. to 2 p.m. Monday, Wednesday and Friday, but she’s not about to close the door at 2 if a customer is waiting.

Her business is steady. More often that not, residents simply drop in to chat. And she’s happy to listen.

“We do a lot of talking, and a lot of listening,” Daisy says. “I’m interested in what the residents are doing.”

In June, the branch held a 10-year celebration — which just happened to be a celebration for Daisy and Paul, too, for their 55 years of service each to F&M.

“This branch has just been so great for the customers,” Daisy says. “A lot of customers are F&M customers who have moved to Trinity Oaks.”

And if they’re not, the F&M Switch Coach program members are happy to set up their accounts before they arrive, Daisy says. “That way, they already feel part of the community.”

The Trinity Oaks branch is a full-service branch, Daisy notes. “We can do anything customers need.”

Trinity Oaks customers and employees who bank with F&M can bank there, as well as family members of residents who also have accounts with the bank.

The office contains a safe which houses safe deposit boxes, so residents can store important papers and other items there.

Daisy says that some of her customers have embraced the high-tech banking offerings, and some haven’t. “It depends on where they worked and what they were doing when they retired.”

The branch does not have an ATM machine, although there are machines nearby at other branches on Jake Alexander Boulevard or Avalon Drive.

Barbara Garwood discovered that this week when she brought her ATM card in to Daisy to make a withdrawal. Barbara works for Trinity at Home, a home care and care management group based on the Trinity Oaks campus.

No ATM, no problem. Daisy simply pulled out a withdrawal slip from the neat stack on her desk and gave Barbara the cash she needed from her account.

Speaking of Avalon Drive, Barbara McLaughlin from that F&M branch fills in for Daisy from time to time.

“Barbara loves to get here to see the residents, too,” Daisy says.

And the residents love to see them.

“This branch is wonderful, it really is,” says Dixie Scott, who moved to Trinity Oaks in 2011 with husband Earl. “When I can’t understand something, she explains it to me.”

Fran Schumacher glides by every day on her scooter. On this particular day, she and Daisy chat about an upcoming beach trip Fran will be taking.

Billie Bryant has lived at Trinity Oaks for seven years. She is co-chairman of the gift shop on the second floor, The Shop On the Corner.

“Daisy is one of our customers as well,” Billie says. “She’s our friend for sure.”

Daisy hears all about her customers’ lives, and shares her story as well.

She’d just graduated from Granite Quarry High School when Paul’s father, J.E. Fisher, asked her to come to work for F&M. She and J.E. Fisher and three others worked at the bank’s original location in Granite Quarry. The tiny office is now used for board meetings.

“That’s where I started,” Daisy says. “The Fisher family has been my family all the way through.”

Daisy remembers posting checks to ledgers and sending out quarterly statements, all done by hand.

“You can’t believe all the changes,” she says.

Through it all, Daisy’s commitment to banking has remained constant.

“Daisy is not just an F&M employee, she is a friend to the residents living at Trinity Oaks,” says Bill Johnson, executive director of Trinity Oaks. “She goes above and beyond to assist them and guide them with their banking needs. She talks with them about their families, gets to know their history, past occupations and interests. We are blessed that F&M is willing to invest the time and resources to allow Daisy to be here. I believe for Daisy it is a ministry.”

Daisy and her husband, Larry, will celebrate their 57th wedding anniversary in December. They have two sons, Eric, a Lutheran pastor in West Columbia, S.C., and Dwayne, a retired teacher and coach.

Daisy has to chuckle at the fact that one of her sons is retired, and she’s still working.

Her grandson, Jacob, is a junior at UNC-Asheville, and clearly the apple of his grandmother’s eye.

When Daisy is not at the office, she’s most likely doing something at her church, Faith Lutheran.

But Trinity Oaks residents are always glad to see her office door open.

“She’s the best thing that happened to this place since I’ve been here,” Ann Honeycutt says. “It just makes it so easy for us to do our banking. It’s a lifesaver for me.”