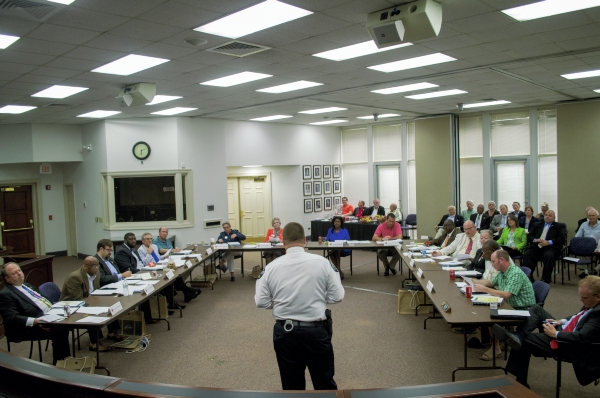 Council challengers hint at interests with questions during Tuesday meeting

• Oct. 3-27: Applications for absentee ballots will be taken

Rowan County Board of Elections

The extent and nature of questions asked during a city council candidate informational meeting on Tuesday surprised some incumbents, but revealed interests and priorities of several challengers.

Incumbents and previous city council candidates after the meeting said the amount of questions was unusual. Traditionally, the meetings only include presentations from city staff members. Several incumbents and previous council members or candidates remarked before the meeting that they didn’t plan to ask any questions because he or she already knew most of what would be presented. Council challengers had different ideas.

Collins was, in fact, the most questioned city staff member during the informational meeting.

Consultant and community activist Ken Hardin was the next, and joked that he wouldn’t be as critical of Collins as Paris. Hardin sought clarity on a figure cited by Collins earlier in the meeting about a reduction in criminal activity. Collins said overall crime during the first half of 2015 is down 20.9 percent when compared to 2014.

“One of the things that everybody has talked about in the past two years is crime, and there’s a number of issues that cause it,” Peoples said. “Me personally, I think less than 100 officers for this city is not enough. And, it’s not something that’s unimaginable to achieve.”

The final two questions from council challengers came from Salisbury businesswoman Constance Johnson and  IT Engineer Roy Bentley. Neither were as critical of Collins as Peoples or Paris. Johnson asked about the top issues that contribute crime.

Transportation was another issue that Peoples and Hardin asked about. Peoples was specifically concerned that the routes weren’t taking inner city children to parks. Peoples spoke the most questions of any city council candidate during the informational meeting.

Peoples’ transportation concern was that inner-city children weren’t able to travel by bus to Salisbury Community Park, which is about 300 acres. It’s located West of Salisbury. Bus routes end near the Salisbury Mall and don’t extend to the park — something Peoples was upset about.

“Everybody’s tax money pays for that park,” Peoples said. “The park has been bought. It’s been developed, but the city has not come through and made sure this park is beneficial  to the taxpayers and the youth in the city.”

Candidate David Post then questioned the reason for a rising cost of transportation, but didn’t receive a definite answer.

Following a brief discussion on transportation, it was Paris’ turn again. He presented invoices showing the City of Salisbury had purchased several thousand dollars in furniture from a business owned by Myra Heard’s husband. Paris asked why the purchase wasn’t a conflict of interest. City Manager Lane Bailey said Paris’ question would be one for previous city manager David Treme, who retired in 2011.

Paris’ parade of questions ended, perhaps, earlier than he expected. Though the meeting was intended for city staff to provide information to council candidates, Paris asked for outgoing Mayor Paul Woodson to come to the front of the room.

“I believe he took off,” Bailey said, responding to Paris’ question.

Paris intended to ask about a rumored sale of Fibrant to a company called North State Communications. Paris asked if Woodson walked out of a meeting where the city was offered or involved in negotiations for a sum of money to purchase Fibrant.

Assistant City Manager John Sofley, who served as interim manager for a time, denied that the city was ever offered money to purchase Fibrant. Paris further asked if Woodson simply didn’t tell the city about the sale.

Editor’s note: this article has been updated to correctly reflect local attorney Todd Paris’ statements about a rumored sale of Fibrant.

Former Rowan County Commissioner Jim Sides is famously known for a van that bear his name, Bible verse numbers and the... read more