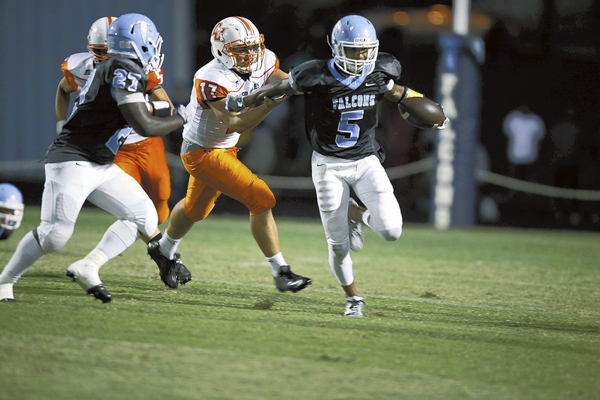 James sipes / for the SALISBURY POST West Rowan’s Kortez Weeks (5) alludes Davie County tacklers on his way to a 95-year kickoff return for a touchdown. The play sparked West to a 35-14 victory over the War Eagles on Friday night.

One of the best things about sports is how quickly a game can turn.
With 45 seconds remaining in the first half of West Rowan’s home non-conference game against Davie County last night, the Falcons were facing a 14-0 deficit. Davie quarterback Chris Reynolds was slicing them apart, linebacker James Boyle and the Davie defense were smothering West’s ground game, and West’s passing game wasn’t doing much better.
Davie had a pep in its step. West looked shellshocked. But then West’s Kortez Weeks changed everything. He returned a kickoff 95 yards for a touchdown, answering Davie’s TD in 15 seconds and marking the fifth straight year West has scored against Davie on a kickoff or punt return.
That was the springboard to a 35-14 West victory that was much, much closer than the final score.
“Everything is going good,” Davie coach Devore Holman said. “The offense is moving the ball. The defense is getting after their rear ends. Then all of a sudden, we kick off right before the half, they get momentum going and it just kept on.”
“Yeah, that was a big play to get on the scoreboard when we weren’t playing too good,” Joe Nixon said after notching his first win as West’s coach. “For the kids to face some adversity and battle back, I’m really happy with our team.”
The Falcons (1-1) tied the game with 4:30 left in the third quarter, they went ahead with 7:56 to go and they tacked on two scores for good measure in the final 2:52. Davie fell to 0-2.
West put together an 11-play, 61-yard drive to tie the game at 14. On fourth-and-1 from the Davie 36, Otto took a shotgun snap in a hammer-formation backfield and churned five yards. Running back Jovon Quarles covered the final 18 yards and Austin Morrison’s PAT tied it.
Owning field position throughout the second half, the Falcons began their go-ahead drive at the Davie 39. On third down, Davie’s Mitchell McGee nearly intercepted a pass. That brought up fourth-and-19 from the 22. West surprised Davie with a running play, and Quarles was barely touched as he went over right tackle for a 22-yard score. The point-after kick was blocked, but West led, 20-14.
“We’ve got to get off the field in that situation,” Holman said. “I was screaming at the top of my lungs, and coach (Randy) Athey was screaming at the top of his lungs at our defensive linemen. I expected a draw or screen or cartoon.”
“I figured they were going to sit back and drop in coverage,” Nixon said. “We like what we have with the counter, and Quarles made a heck of a run. We know he’s a special running back. We told him to be patient, keep pounding it in there and we felt good about him getting loose eventually.”
When Reynolds’ scramble failed to move the sticks on a fourth-and-2 play from the Davie 33, the Falcons could smell blood. They produced more fourth-down magic to put the dagger in the War Eagles, with Otto connecting with Weeks for 19 yards on a fourth-and-8 play. A successful two-point pass made it 28-14 with 2:52 left.
“It was a slant-and-go,” Nixon said. “We had been hurting them on slants. We saw they were wanting to jump inside, so we went with the slant-and-go.”
“We broke down in coverage,” Holman said. “We had the perfect call for that situation and we didn’t execute.”
West scored again with 46 seconds remaining to cap a 35-0 scoring spree.
Funny things happen in this rivalry, and in the first half the underdog War Eagles had West staggered. They drove 58 yards to open the scoring. After completing passes to Cooper Wall and Curtis Gray, Reynolds kept the ball and motored 23 yards to the West 1. Reynolds ran it in on the next play and it was 7-0 with six minutes left in the half.
“We came out with a lot of intensity,” Holman said.
“We knew Page (which beat Davie 53-22) was really good, we knew Davie had some skill players on offense, and we would be tested,” Nixon said.
After Davie defensive tackle Jarrell Farmer batted down a fourth-down pass by Otto, Davie marched 59 yards. Four plays after Wall made a 20-yard reception on a skinny post, West was called for interference against Wall. On second-and-goal from the 15, Reynolds hit Ben Ellis on a crossing route, and Davie was ahead 14-0 with 45 seconds left in the half.
“(Reynolds) is a super quarterback,” Nixon said. “He does a great job finding a lot of time and keeping his eyes downfield. You’ve really got to cover those guys the whole time.”
This is when Weeks gave West a serious shot in the arm. A special-teams gem is nothing new for the Falcons, and Davie knows that all too well as it lost for the seventh straight time in the series.
Quarles came alive at just the right time. He only managed 30 yards on his first 19 carries, but his 20th carry resulted in the 22-yard run on fourth down that gave West the lead.
In the first half, West had no answer for Reynolds, who was 11 of 13 for 110 yards. It was a different story, though, in the second half. Reynolds’ 38 second-half passing yards all came on the game’s final play.
Otto was fantastic, going 17 of 28 for 189, including 10 completions on 13 second-half attempts. He also rushed for 44 physical yards. Weeks (101 yards on nine catches) and Juwan Houston (83 yards on seven catches) were lethal as receivers.
“(Houston) made some big first downs,” Nixon said. “We feel good about those (receivers) and we want to get them involved.
Boyle, Davie’s junior linebacker, was an absolute beast, wrecking plays in the backfield and creating the game’s only turnover with a second-quarter interception.
“A lot of those guys gave it everything they had,” Holman said. “That’s all I can ask of them. We’ve just got to work on the part of executing and finishing things off.”