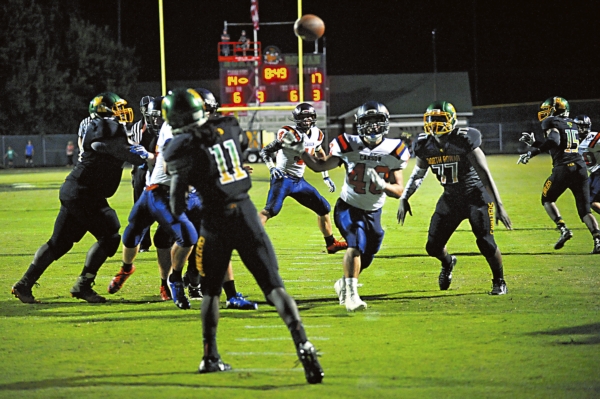 An interception in the making. North quarterback Josh Ellis (11) throws the ball over the middle with Carson's Ryan Bearden (41) in the center of the photo waiting to make the interception. photo by Wayne Hinshaw, for the Salisbury Post

SPENCER — North Rowan had more rushing yards and more passing yards, but the Cavaliers still lost 44-26 to Carson on Friday at Eagle Stadium.
“The turnover bug bit and it bit us bad,” North Rowan coach Ben Hampton said. “A team that makes five turnovers isn’t going to win very often.”
Carson also blocked a North punt and Carson cornerback Brenden Westbrook, who made one big interception, dropped another ball that would’ve been an easy pick-six.
“We were putting a lot of pressure on them with our pass rush and forcing them into throwing bad balls,” Westbrook said. “We created a lot of turnovers.”
While North Rowan (1-1) was serving up a classic lesson in self-destruction, give Carson (1-0) credit for constantly capitalizing on North’s mistakes. North dominated the line of scrimmage and field position most of the first half, but the Cougars still led 17-14 at the break because they were 3-for-3 in cashing in points following North turnovers.
“North Rowan has so much speed that it’s a chore for us defensively to defend their athletes in space,” Carson coach Joe Pinyan said. “Our defense did a great job of hanging in there and containing them in the first half when our offense couldn’t get out of the hole.”
There were numerous big plays, none bigger than the one turned in by Carson cornerback Armoni Hogue and safey Andrew Jerman with eight minutes left. Carson held a 36-26 lead, but the Cavaliers were threatening to roll down the field. North’s sophomore QB Josh Ellis fired a strike to tall receiver A.J. Shields, but Hogue’s tackle forced a fumble and Jerman made the recovery in a pile of diving bodies.
“It was a great play by Armoni to knock that ball loose,” Jerman said. “After that, we went from playing good to playing great.”
Xavier Haley rushed for 136 yards for the Cavaliers and also had an 83-yard kickoff return to set up a touchdown.
Carson QB Owen White and Austin Lear, who scored three touchdowns, were the offensive stars for Carson. White, a sophomore, threw long TD passes to Lear and Brandon Huneycutt and also hit fullback Dylan Livengood with a 41-yard strike that set up a score.
“For a sophomore to jump in there in this environment and play like he did,” I thought he was great,” Pinyan said. “Owen made big throws and he made big throws under pressure.”
Carson opened the scoring early in the second quarter after a North fumble provided a short field. White scored the touchdown on a sneak.
North answered with an 80-yard drive. Haley finished it from the 6-yard line.
A North fumble on a punt return led to a 26-yard Cole Howard field goal for a 10-7 Carson lead.
After Westbrook’s interception, White found an open Lear for his first varsity TD pass.
“I may not have looked nervous, but I was plenty nervous,” White said. “That first touchdown pass helped. It lifted a weight off my shoulders.”
North struck back with 1:03 left in the first half, with Ellis connecting on a 79-yard pass play with Alonzo Sirleaf. Carson led 17-14 at the break.
“The coaches told us to keep pushing,” Westbrook said. “They told us to keep our foot on the gas and we’d get the victory.”
A great punt by Howard pinned North near its goal line early in the third quarter, and Ryan Bearden picked off a pass and lugged it to the 3-yard line. Lear scored from there.
White’s pass to Livengood on a second-and-13 play set up a scoring plunge by Bailey Rayfield for a 30-14 Carson lead late in the third quarter.
North rallied.
Haley’s long kickoff return set up a Jaleel Webster scoring run, and then Terry Cathcart forced a fumble that Jake Pritchard recovered. When Ellis scored from the 5-yard line on the final play of the third quarter, the Cavaliers trailed 30-26.
White responded with Carson’s biggest offensive moment, a clutch, 45-yard TD throw to Huneycutt on a third-and-6 play.
Not long after that, Hogue and Jarman combined to create North’s fifth turnover. Then a Carson fourth-down stop at the 4:10 mark sealed victory.
Lear broke another TD run when the Cougars were just trying to melt the clock for the final points.
“We made a lot of mistakes,” Pinyan said. “But what we did right sort of overwhelmed what we did wrong.”
Carson broke a three-game losing skid in the series and also ended North’s mini-streak of seven straight wins against Rowan opponents.
“A lot of what happened you can chalk up to youth,” Hampton said. “We’ve got a lot of work to do.”