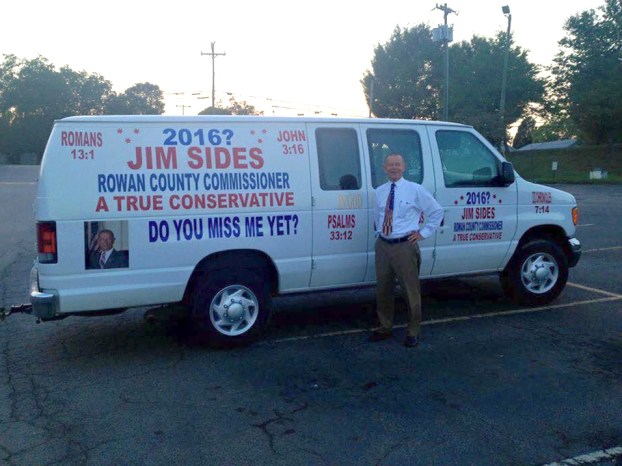 Sides for Commissioner in 2016? Former Rowan County Commissioner Jim Sides is famously known for a van that bear his name, Bible verse numbers and the phrase “a true conservative.” This week, however, a photo of an updated van that questions a 2016 election bid circulated on social media.

The most notable additions to Sides’ van include the year 2016 followed by a question mark. An additional sticker was added asking “do you miss me yet?” A picture of Sides has also been added to the van.

In a text message, Sides confirmed the picture was real and not digitally altered, as some had suggested on social media. Sides said the picture was taken by Rowan County Commissioner Judy Klusman.

Sides said in a text message that he hasn’t decided whether he might run, and is only exploring his options.

Local businessman Jake Alexander was part of a political action group named Rowan Alliance. The group spent more than most single, local candidates in the 2014 election cycle. Sides was a target of the group’s advertising campaign.

In the past, Sides has joked that he never gets elected to consecutive terms. A short hiatus always separates Sides’ terms on the Rowan County Board of Commissioners.

His first term as a county commissioner was in 1980 and he served until 1984.

Sides secured a spot on the Rowan County Board of Commissioners in 2010, but didn’t receive enough votes for re-election in 2014. He didn’t advance past the Republican primary.

If Sides does indeed run for county commissioner in 2016, it would match the series of events that proceeded the 2008 election.

Earlier this month, former Salisbury City Manager Doug Paris was promoted from interim to the permanent town manager in Midland.

Midland is located in the southern tip of Cabarrus County. Paris said he was named interim town manager in May, and asked if he’d be interested in a permanent manager position one month later. Paris said he was officially made the full-time manager on Aug. 11 during the town board’s meeting.

Paris said Midland is a “fantastic community.” Among the town’s future projects is the 190-acre Wallace Park. It would be the largest in Cabarrus.

Prior to becoming Midland town manager, Paris was the Salisbury city manager from early 2012 to June 2014. His contract with the city was mutually terminated after a five-hour closed session, and his severance package totaled more than $200,000.

The forum is scheduled to be held at Catawba College on Oct. 15. The time is tentatively 6 p.m.

Rowan County Chamber of Commerce President Elaine Spalding said the deadline for candidates to confirm forum attendance is Monday by close of business or 5 p.m.

Based on how many candidates confirm attendance, Spalding said they may be split into two groups. A total of 16 people registered for Salisbury City Council.

The Salisbury City Council candidate forum is sponsored by Catawba College, the Rowan County Chamber of Commerce and the Salisbury Post.

He also signed House bill 268, which includes a number of unrelated changes to state law. It modifies quick clearance procedures to allow the Department of Transportation to remove a vehicle with concurrence of a law enforcement officer. Under current law, only a law enforcement officer can clear a vehicle. This authority will help during snow and ice events, according to McCrory’s office. The bill also authorizes a necessary permit for an economic development project in Charlotte. Last, the bill extends the sunset for the Department’s program for participation by disadvantaged and minority-owned and women-owned businesses.

First it was the State Department of Environment and Natural Resources, then Republicans joined in.

“The future of North Carolina’s waters must continue to stay in North Carolina’s hands and not in Washington D.C.,” van der Vaart states in the letter. “Our state has a much better record of protecting and cleaning our waters than the federal government.”

The rule, which becomes effective Aug. 28, redefines what ditches, drainageways, wetlands, streams and other features are subject to federal regulation under the Clean Water Act. In a news release about the letter, DENR says the redefinition will result in a significant expansion of federal authority and control over local water and land use management, and is expected to have the greatest impact in North Carolina on land east of Interstate 95.

Saying Cooper should put politics aside, the N.C. Republican Party also asked for the attorney general’s support. In a news release, Republicans said the EPA rule would “needlessly burdening our state’s farmers and land owners and may even prevent farmers from farming existing farmland.”

By Shavonne Walker shavonne.walker@salisburypost.com Since he was a teen, Chris Phillips always knew he wanted to be a firefighter and... read more