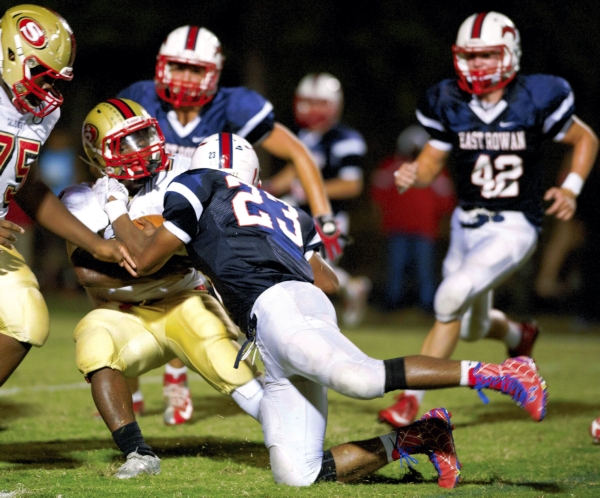 GRANITE QUARRY — East Rowan stood for the National Anthem Friday night, then stood for little else.

The Mustangs dominated line play on both sides of the ball and manhandled visiting Salisbury, 33-0, in a game that had “Win One For Gina Talbert” written all over it.

“A lot of people on the team knew her,” junior Chase Fritz said after East (1-1) recognized the former educator, coach and citizen who passed away Thursday. “And a lot of the seniors from last year were really close. This was hard.”

Under that veil, the Mustangs played hermetically sealed defense, limiting Salisbury (1-1) to 186 total yards and posting their first shutout since October 2012 — 33 games ago.

“This is a great group of kids who worked their butts off,” coach Kenneth McClamrock said. “They came together and played for each other. We had a game plan and they went out and executed it.”

Even without injured starting quarterback/kicker Tate Houpe, East had little trouble against a Salisbury defense that recorded 12 sacks in a season-opening win. Junior Max Wall was handed the keys to the offense and steered the Mustangs to five touchdowns.

“This is what we should have been doing last week,” Wall said after passing for two touchdowns. “Last week, we played a good game but messed up. Tonight we didn’t.”

Wall completed only eight of 18 passes for 96 yards and ran for another 60, but his presence was clearly felt. “There really wasn’t a lot of offense,” said Salisbury coach Ryan Crowder. “But they made some big plays. Wall is kind of tough to contain, and when you’re worried about containing him, some of the other guys are going to beat you.”

The one who caused the most concern was East’s Keith Tillman. The junior running back bumped and bruised his way for 114 yards and scored four touchdowns — three on the ground and another on a 16-yard TD pass from Wall that gave the Mustangs a 14-0 lead just seconds into the second quarter.

“It shocked me,” Tillman said afterward. “I was surprised as I was doing it. Credit the offensive line and receivers for some great blocking.”

McClamrock had nothing but praise for Tillman. “Keith Tillman is a hidden talent that nobody knows about,” he said. “He’s incredible. We have the two best running backs in (the South Piedmont Conference). We have the best two receivers. We should be able to put points on the board against everybody.”

Then with junior Marcus Corry under center, Salisbury took the second-half kickoff and drove to the East 24 before backtracking. An 11-play possession that consumed nearly seven minutes fizzled when defensive tackle Norman Kelly sacked Corry for a 10-yard loss.

“Lots of good chemistry on the field tonight,” Kelly said with a 150-watt smile. “That and not being satisfied with anything. Every play has its own life. Every play matters.”

The game ended not with a pound sign but an exclamation point. Facing fourth-and-21 from the Salisbury 46 with less than a minute to play, Wall fired a strike to wideout Naquis Caldwell — who made a spectacular, one-handed grab across the middle and raced into the end zone.

“When your guys are making one-handed catches, you know it’s your night,” Wall said. “That was nice, really nice.”