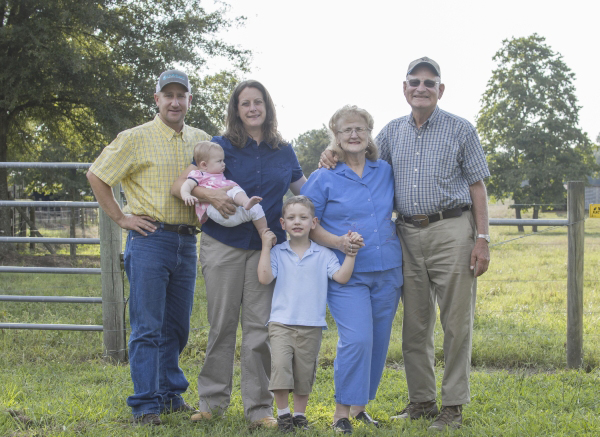 Three generations of the Deal family pose for a picture at their farm in southwestern Rowan County, near China Grove. From left: Eric, Sherilee, Margaret (baby), Guy, Martha and Oscho.

Both Oscho and his son Eric said the recognition is an honor for Circle D Farm, which started operating in 1842.

“We can either enhance nature or strip the land down, and with sustainability you’re able to get more years of productivity,” Eric said.

Oscho noted a number of changes at the farm over the years that have increased sustainability. One example, is steadily moving fences for grazing cattle. The goal, Oscho said, is for cattle to have a balanced diet of greens. If the area cattle are confined to remains the same, Oscho said the livestock will only choose the best grass initially. Slowly, the cattle will eat less healthy grass. By the end, cattle only eat the worst of available grass, he said. Moving a fence steadily ensures a balanced blend.

Another example that Oscho said contributes to sustainability is installing water wells for cattle instead of allowing livestock to drink out of nearby streams. The wells, Oscho said, are placed in various areas around the farm.

Sloop said Circle D Farm “is a great example of how farming can be done in a sustainable and environmentally friendly way.”

Circle D farm is more than 300 acres, Oscho said. Although they only raise beef cattle now, Circle D has a storied history of varied crops. It was only a few years ago that the farm housed acres of corn and soybeans. Referencing this year’s drought, Oscho joked he’d rather not be raising corn this year.

Other, previous products from Circle D include sweet potatoes, cotton and hogs.

Oscho’s role in the farm’s activities began as soon as he was old enough to get on a tractor, he joked. He soon took on primary responsibility for the farm’s pigs. Now, Oscho and his son Eric run the farm. It’s Oscho’s primary job. Eric works for chicken-processing company Perdue in addition to helping run the farm.

As with most farms, Circle D has adapted to changes in farming technology in addition to implementing sustainability measures. Artificial insemination is an example Deal cited. When the farm produced row crops, Deal said Circle D practiced no-till farming — not churning up the ground to plant crops.

The land that once produced row crops is now pasture for Circle D’s grazing cattle. Even with technological and operational changes at the farm over the years, the Deal family’s passion for agriculture hasn’t diminished. Eric’s wife Sherilee is a teacher at Northwest Cabarrus High School who supervises the school’s Future Farmers of America Program. Students have been to Circle D several times to learn about cattle. And, the seventh generation to live on the farm — Eric and Sherilee’s son Guy — is getting started early. Guy is helping to care for a sheep that he will show at the Rowan County Fair.