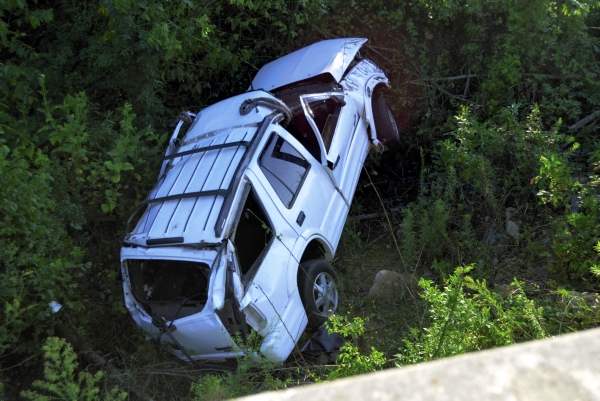 N.C. Highway Patrol troopers say a Rowan County woman lost control of this Oldsmobile Bravada Wednesday on Edmiston Road, overturned at the bridge and landed in Back Creek in the western part of the county, near Mount Ulla. The driver was thrown from the vehicle and died at the scene. Shavonne Walker/Salisbury Post

A Rowan County woman died Wednesday after she lost control of her sport utility vehicle, struck a guardrail and overturned down an embankment on Edmiston Road in western Rowan County.

Brandy Jackie Barnhardt, 41, of Edmiston Road, was traveling south in the 800 block of Edmiston when she ran off the road to the right, N.C. State Highway Patrol Trooper C.T. Walker said.

Barnhardt over corrected the Oldsmobile Bravada, struck a guard rail at a bridge and overturned, the vehicle coming to rest down an embankment at Back Creek, near Mount Ulla.

The vehicle’s airbags deployed, but Barnhardt, who was not wearing a seat belt, was ejected from the SUV, Walker said.

The trooper said speed was a contributing factor in the crash. The speed limit on that stretch of road is 55 mph. The incident occurred just after 4:30 p.m.

Family members told the trooper that Barnhardt had been out all day, and they weren’t sure where she was going when the wreck happened.

Bags, clothing and other debris from the vehicle were scattered on the roadway and bridge as Highway Patrol troopers worked to determine what happened in the crash. Edmiston Road was blocked off in the 800 to 900 block with traffic being turned around. A few neighbors wandered onto the roadway to get a closer look at the crash site.