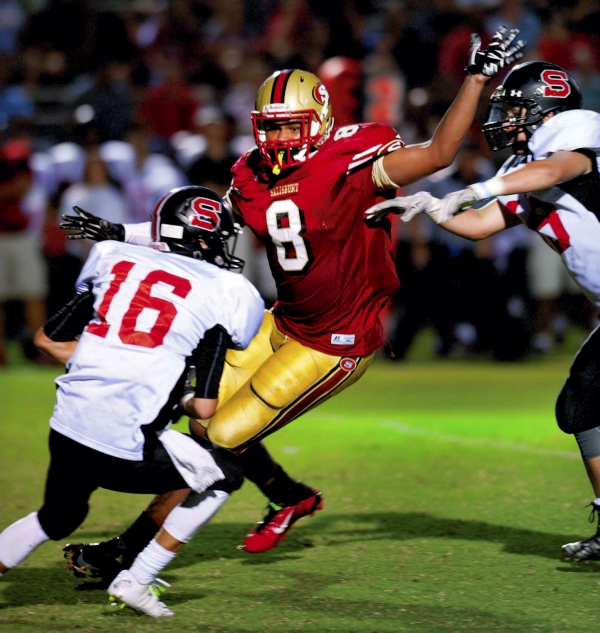 JON C. LAKEY / SALISBURY POST Salisbury’s DJ Alexander (8), is about to put the wraps on South Rowan quarterback Heath Barringer (16), for one his five sacks in last week’s game at Ludwig Stadium. Salisbury won the game, 35-20, behind the Hornets’ 12 team sacks.

SALISBURY — Mistakes piled up, as they always do on opening night, but Salisbury managed to beat South Rowan, 35-20, at Ludwig Stadium.
“We made wrong reads, we had bad footwork, and sometimes guys went the wrong way,” Salisbury coach Ryan Crowder said. “But when you get 12 sacks, that disguises a lot that you did wrong.”
Producing five of those sacks was linebacker DJ Alexander. The “DJ” is short for Donnell Jr.
“I just did what I was supposed to do, did what the coaches told me to do,” Alexander said. “It just happened. South has a fast quarterback (Heath Barringer), and our No.1 job was not to let him break contain. There were times I blitzed and didn’t get blocked at all, and he was in the pocket waiting for me.”
South tried to block Alexander, but he may not have noticed. He is large enough at 6-foot-4, 254 pounds to brush aside running backs. Salisbury’s program lists Alexander at 6-3, 215, but those dimensions are no longer accurate. He’s blown up physically entering his senior year.
“Just a lot of time in the weight room and sit-ups and push-ups, when I couldn’t get to the weight room,” Alexander said. “I didn’t do a lot of sitting around this summer.”
Alexander probably is better known for basketball. He’s been a good varsity player for the Hornets since he was a freshman, relying on strength to get points inside and using his mobility and soft touch to score outside. He averaged 13.6 points per game, while making second team all-county as a junior and he’s scored 790 career points.
Still, when he dreams, he dreams about tackling people.
“I love football the most,” said Alexander, a three-year varsity starter “I don’t think I realized how much I loved football until we lost in the playoffs last season. I hated there wasn’t another football game to get ready for and I couldn’t wait for my senior season.”
His senior year started with a bang, but it also began with unusual circumstances. Alexander was on the sideline when Friday’s game started.
“He’d gotten dinged a bit in a scrimmage, so he was limited in practice last week,” Crowder explained. “But by Thursday, he was moving around pretty good. Then, on game night, he was getting antsy to get in there.”
The parade of sacks followed.
Crowder was impressed, but he wasn’t amazed.
“It’s one of those with-great-power-comes-great-responsibility things,” Crowder said. “With the size DJ has and the ability DJ has, these are the kind of games we expect him to have. For us to succeed, our best players have to play big.”

By Mike London mike.london@salisburypost.com SALISBURY — The bridge at Dan Nicholas Park is the landmark that represents the closing leg of... read more