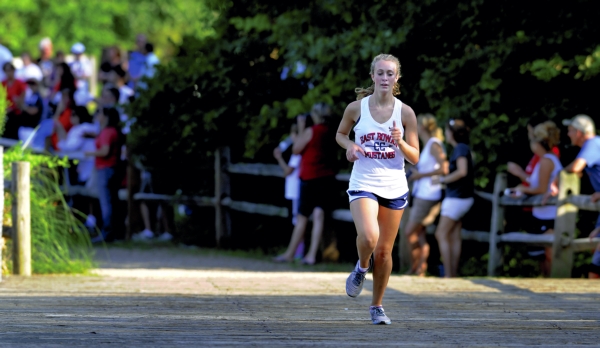 SALISBURY — East Rowan’s top two female cross country runners are junior Faith Faller and senior Faith Blume, a twist of fate that is a source of confusion.
“Coach yells, ‘Come on, Faith!” and we both always turn around and everyone laughs,” Faller explained. “We’re used to it.”
When East Rowan coach Jon Heidrick yelled his first “Come on, Faith!” on Tuesday, it was directed at Faller. She was first to navigate the bridge at Dan Nicholas Park and first to cross the finish line (in 21:49) at the Pre-Rowan County Meet.
“That was such a cool experience,” said an excited Faller, who placed fourth in the county meet last season. “I’d never led a race before.”
Heidrick didn’t have to wait long for his next, “Come on, Faith!” Blume took third place.
Faller spent the summer preparing to win her first race.
“I put in a lot of work, but you never know how it’s going to go,” Faller said. “When you get results like this, you feel like it was all worth it.”
Faller’s victory was equally gratifying for Heidrick.
“She has a heck of a work ethic and she sets high goals for herself,” Heidrick said. “That’s what you’re looking for — someone who will set goals and work for them. She led start to finish today and her endurance looks good. Her speed looks good. She’s knocked 30 seconds off her mile time in the last year.”
Heidrick said all cross country runners have a plan until the gun goes off. That’s when panic can set in.
“She never panicked,” Heidrick said. “She knew what she wanted to do and she went out and ran her race.”
Carson, defending county champion and still very young, used depth to easily win the team title. Carson’s Jesse Nichols ran 22:07 and finished second between the Faiths.
“She was good as a freshman (second in the official county meet) and she’s still improving,” Carson coach Les-Lee Efird said.
Carson also finished 4-5-6-8, with Taylor Wiggins, Summer Blais, Hannah Venable and basketball star Olivia Gabriel posting high finishes. Wiggins, a sophomore running her first 5K, was the big surprise.
“Olivia recruited Taylor from the basketball team,” Efird said. “She’s a natural.”
Carson had 10 of the top 17 runners.
Brooke Suddeth and Tempest Robbins led West Rowan to third place. Ellen Simons (9th) and Mary Kaufman paced Salisbury to fourth place.
South Rowan and North Rowan didn’t have enough runners to post team scores, but South’s Micah Helms placed seventh individually. Aubree Cain was the top runner for the Cavaliers.
West senior Josie Heglar, defending county champ, didn’t compete on Tuesday but is expected to be back running against Faller, Blume and Nichols at the official county meet in September.
See Scoreboard on page 2B for complete results.