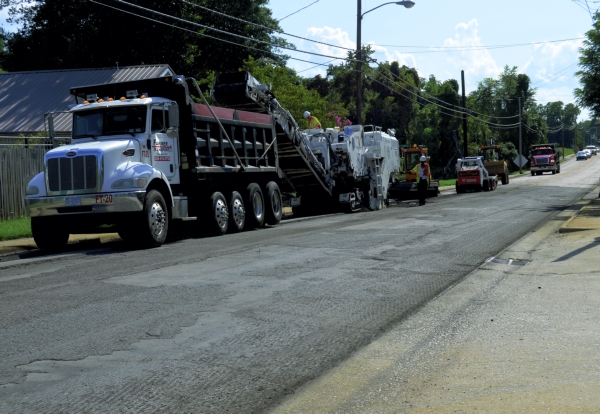 EAST SPENCER — Ask most in the town of East Spencer to recollect when the last time Long Street was paved and after some puzzled looks, the answer is close to 10 or 20 years ago.

Long Street is part of a N.C. Department of Transportation resurfacing project that will see the road stripped of its old asphalt and paved with new. The resurfacing will cover Long Street to Long Ferry Road and East Innes up to Bojangles’ restaurant.

Neal estimated the last time Long Street had been resurfaced was in the mid-1990s. He said Long Street really needed to be resurfaced.

The DOT crew makes an assessment of the roads and provides each road a rating system and score to determine the one with the greatest needs. A road crew subcontracted by N.C. DOT removed the last inch and a half of surface that oxidized and is beyond repair.

Right now the road is being milled, or stripped of the old asphalt. A new surface will be placed within the next few days, Neal said.

Neal said crews are currently working on the list for the next cycle of roads that will be resurfaced.

Town Administrator Macon Sammons Jr. said the repaving won’t affect any of the town’s current projects including the revitalization of downtown, the water/sewer rehab, the Gateway Plan, and a pedestrian/bike plan.

Sammons said the repaving has been a help because some manholes were covered when the road was last paved. He said with the help of Salisbury-Rowan Utilities and N.C. DOT, they’ve been unearthed and will be raised by the road crew so as not to cover them again.

“We are so lucky to be on the front door of this project because it’s coming through our city,” said Mayor Barbara Mallett.

Mallett said the town had been in talks with DOT prior to the work to determine if any of the town’s projects would be affected by the paving, especially since they didn’t want to pave and then have to cut into it at a later date.

She said the town is very pleased with the work that’s been done thus far.