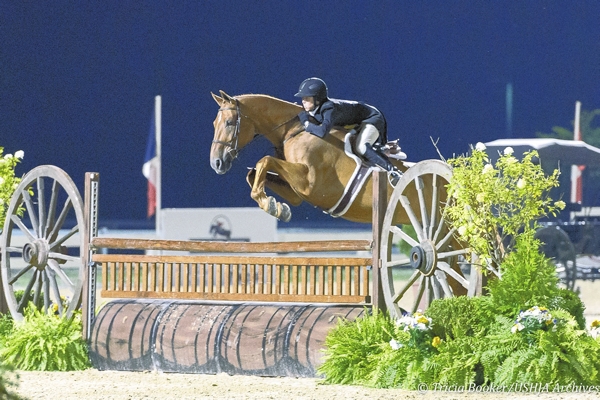 Liza Towell Boyd and her horse, Brunello, take a jump on their way to their a third consecutive USHJA International Hunter Derby Championship Aug. 15 in Lexington, Ky. Photo courtesy of Tricia Booker/USHJA

A third consecutive championship is unprecedented, as was the 36-year-old rider’s second in 2014. “To win it twice was pretty unbelievable,” said Lisa Taylor Towell, Liza’s mother.

The equestrian community that follows hunter jumper competitions looked on Liza and Brunello’s going for a third straight championship as the equivalent of American Pharoah’s vying for the Triple Crown in thoroughbred horse racing.

“The hype was really up there,” Lisa Towell said.

Boyd, who rides and trains at her parents’ Finally Farm in Camden, S.C., is the daughter of Lisa and Jack Towell, both of whom grew up in Salisbury and graduated from Salisbury High. Jack Towell also is a graduate of Catawba College.

Lisa is the daughter of Lib Taylor and the late Ed Taylor. Jack is the son of the late Ned and Rachel Towell of Salisbury. Ned Towell was a well-known teacher at Salisbury High School.

Early in Lisa and Jack Towell’s marriage, they had a small farm off Harrison Road. Jack was still a student at Catawba and Lisa was teaching school in Rockwell. Liza and a younger brother Ned were born in Salisbury, and before the family moved to South Carolina, Liza and Ned attended Sacred Heart School. The Towells also have a younger son Hardin, an accomplished horseman himself.

The “Finally Farm” name for their business in Camden comes from the Towells’ having had so many jobs working for other people that they would tell each other, “When we finally have our own farm, we are going to do so-and-so,” Lisa said.

From her earliest days on a horse, the Towells wanted Liza to be the best rider she could be, Lisa said. “She won just about every award you can win when she was riding as a junior,” she added.

When her junior career was over, Boyd attended and graduated from the College of Charleston, then returned to the family business. She has been a successful trainer and rider at Finally Farm, having won more than 25 USHJA International and National Hunter Derbies.

Her partnership with Brunello has been special. Lisa Towell said the pair only lost the 2012 USHJA International Hunter Derby Championship by quarter of a point. Otherwise, they would have four championships in a row.

Liza and her husband, Blake, have two daughters, 5-year-old Adeline and 1-year-old Elle.

Lisa Towell said a remarkable thing about Liza’s 2014 championship was she was just two-and-a-half months past giving birth to Elle, and prior to that she hadn’t ridden for about seven months.

The recent championship was conducted in two days or phases. Liza was ahead in points after the first day, meaning she had to wait for all the other competitors to post their scores on the second day before her round began.

Since the days when Liza was a junior rider, something Jack Towell had always asked her was a line from a “Robin Hood” movie: “Can you make the shot when it counts?”

“She usually can,” Lisa said.

Huge numbers of people in the equestrian community have watched the YouTube video of Saturday’s second-round performance of Boyd and Brunello. Likewise, thousands also have seen a YouTube video of Jack Towell jumping up and down in celebration.

Brunello is a 17-year-old gelding nationally honored many times. Boyd usually deflects the attention to him. “He is such an amazing animal,” she told reporters after her win in Lexington, “and it felt great to pull this off for him tonight.”

Lib Taylor said her granddaughter has never been one to brag.

“She has worked hard since she was a little girl,” Taylor said. “She’s modest, and does a good job with her horse.”