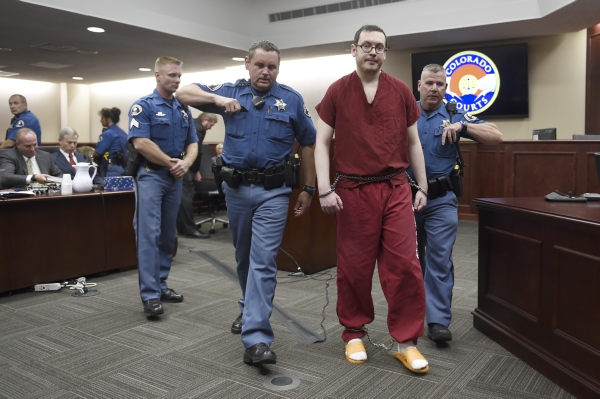 Colorado theater shooter James Holmes is led out of the courtroom after being formally sentenced on Wednesday, Aug. 26, 2015 in Centennial, Colo. Holmes was sentenced to life in prison without parole by Judge Carlos Samour Jr. Holmes killed 12 people and injured 70 others in the July 20, 2012 ambush. (RJ Sangosti/The Denver Post via AP, Pool)

CENTENNIAL, Colo. (AP) — The man who unleashed a murderous attack on a packed Colorado movie theater was ordered Wednesday to serve life in prison without parole plus 3,318 years — the maximum allowed by law — before the judge told deputies, “Get the defendant out of my courtroom, please.”

The gallery applauded the remark by Judge Carlos A. Samour Jr. as he gaveled the hearing to a close, ending a grueling three-year wait to see the gunman brought to justice. Survivors, relatives and a handful of jurors who were in the courtroom cheered and then hugged prosecutors and law enforcement officers. Some wiped away tears.

Samour ordered 28-year-old James Holmes to serve 12 consecutive life sentences without the possibility of parole, one for each of the people he killed in the July 20, 2012, attack on a crowded movie theater.

He then added another 3,312 years for 70 convictions of attempted murder, and six years for an explosives charge.

“The defendant does not deserve any sympathy,” the judge said. “And for that reason, the court imposes the maximum sentence it can impose under the law.”

Samour handed down the sentences after a withering condemnation of Holmes as an angry quitter who gave up on life and turned his hatred into murder and mayhem against innocent victims and hundreds of their family members.

Samour was scrupulously respectful toward Holmes throughout the long trial and months of pretrial hearings. But on the final day in court, he made no attempt to hide his contempt.

“It is almost impossible to comprehend how a human being is capable of such acts,” Samour said.

Samour contrasted Holmes’ bloody assault with the compassion of the lone juror who voted for a life sentence. He also noted the trial was fair, even if some victims were disappointed that Holmes wasn’t sentenced to die.

The judge said prison is harsh and restrictive, and he disputed some victims’ suggestion that Holmes would have an easy life behind bars. He also dismissed complaints that the trial was a waste of time, noting it gave family members and survivors an opportunity to tell the world about their ordeal.

More than 100 victims and survivors testified this week about their searing physical and emotional scars. They talked of flashbacks and nightmares, of relentless survivor’s guilt and enduring physical pain.

Holmes’ mother, Arlene, was the final witness to take the lectern Tuesday. She said her son feels remorse for his deadly attack on a Colorado movie theater. She said his mental illness and medications make it hard for him to express it.

“We know that is very, very hard for people to see,” Arlene Holmes testified. “We cannot feel the depths of your pain. We can only listen to everything you have expressed, and we pray for you. … We are very sorry this tragedy happened, and sorry everyone has suffered so much.”

Jurors rejected Holmes’ insanity plea, convicting him of murdering 12 people and trying to kill 70 others when he opened fire on a packed suburban Denver theater.

To the end, Holmes’ state-appointed attorneys blamed the massacre on his schizophrenia and psychotic delusions. They said Holmes was obsessed with the idea of mass killing since childhood, and he pursued neuroscience in an effort to find out what was wrong with his brain.

Prosecutors pointed both to Holmes’ elaborate planning for the attack and his refusal to divulge to anyone — family, friends, psychiatrists — that he was thinking, and planning, murder.

Holmes stockpiled guns and ammunition and mapped out the Aurora theater complex to determine which auditorium would allow for the most casualties. He even calculated police response times.

Defense attorney Daniel King has said Holmes will not appeal his conviction, sparing victims the possibility of another emotionally wrenching trial.