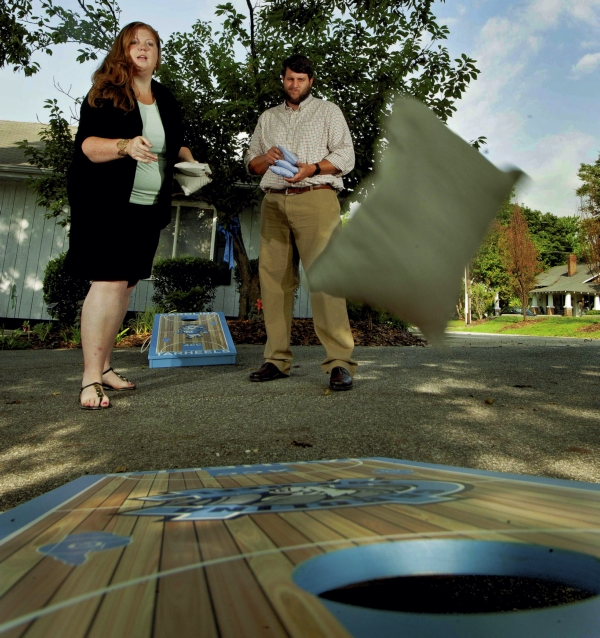 One of a few collegiate cornhole boards that will be included in a silent auction during the Toss for Tots fundraiser in September. Jon C. Lakey/Salisbury Post

Then you’ll want to be at the Trolley Barn Sept. 19, for the inaugural Toss for Tots Cornhole Tournament sponsored by Prevent Child Abuse Rowan.

Like many nonprofits, the organization is constantly challenged to raise money. Beth Moore is executive director, and she for one is ready for a little bit of fun.

Some 24 teams will participate, says Matt Freeze, the agency’s director of development. The first-place team will receive $500 gas cards, second place $300, and third place $200, all courtesy of Wilco Hess.

Not only will folks get to play cornhole, they’ll get to bid on handsome sports-themed cornhole sets featuring their favorite teams: UNC, Duke, Catawba and the Panthers. During the morning event for children, a cornhole set will be decorated with kids’ handprints and will be up for grabs as well during a silent auction. Divided by Four will perform throughout the evening.

Jeff Whitt of Mocksville, owner of Whittco Cornhole, made the sets. Made from heavy birch and decorated with a vinyl wrap depicting each college and professional team, the set latches together, and the eight cornhole bags are contained in a black nylon drawstring bag, which can be stowed within the set. The sets can be used outdoors, of course, but need to be stored indoors.

“These are a bit more high-end than your regular sets,” Freeze notes.

Whitt is officiating the tournament at no charge. Now while there are some pretty hard-core cornhole enthusiasts, Freeze notes, this event is non-sanctioned and just for fun.

Although Moore has perfected a pretty mean spin on her bag pitches.

“I probably won’t have time to play that day, but I do play,” she says.

And what she does is …

“No! I’m not going to tell my secret!” Moore says.

Showing off her top-secret technique, she tosses the bag and it goes straight in the hole.

Board member Rebecca Clement suggested the cornhole tournament, and Moore loved it immediately.

“We wanted something fun and lighthearted, because what we do is so heavy,” she says.

The fall football season and tailgating is evidently the height of cornhole season, too, so the timing seems perfect.

“The more we talk about it, the more people we find who play cornhole,” Moore says.

The event seeks to raise some $12,000 for new medical equipment at the Terrie Hess House, where the agency is housed and sees clients.

“We just really want to make sure we can capture evidence in the best way possible in sexual abuse cases,” Moore says. “We’re trying to make it as non-traumatic as possible. It’s already not fun.”

“We want to get the job done quickly, in a way that’s not too imposing,” Freeze adds.

“We’ve had growth, but we’ve had funding cuts,” she says. “So we really need this fund-raiser.”

Earlier in the day, a free Superhero Fun Run will take place at the Trolley Barn from 10 a.m. to noon. Games and snacks will be provided, and this event serves to grow awareness about Prevent Child Abuse Rowan.

F&M has donated the space for both events, through a grant the agency received.

For more information on either event, call 704-639-1700 or visit preventchildabuserowan.org. You can also check out the cornhole tournament rules through links on that Web site.

Buses hit the streets and schools opened their doors Monday morning to welcome students across Rowan County and in Kannapolis... read more