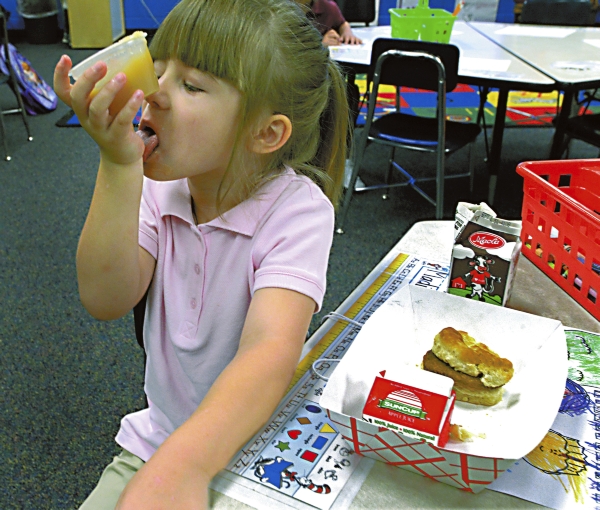 On the first day of school at Landis Elementary, Madison Fontaine, a student in Jessica Utley’s kindergarten class, has a little trouble with the applesauce in her morning breakfast. She forgot to get a spoon and had some running down her arm, but she made out OK. Wayne Hinshaw/For the Salisbury Post Students and a few parents line the sidewalk at Landis Elementary School before the start of classes on Monday, the first day of the new academic year for Rowan-Salisbury and many other school districts. Wayne Hinshaw/For the Salisbury Post

She added that there was a lot of excitement across the district as students returned to school. Moody started out the morning at Landis Elementary School, welcoming students as they arrived at school and visiting classrooms.

“My biggest joy is always to see kindergarteners on the first day,” she said.

In Jessica Utley’s kindergarten classroom at Landis Elementary, the students – mostly – had smiles on their faces.

One of her students, Carlos Velo, happily chatted as he drew pictures and colored early Monday.

He said he was excited about kindergarten because they get to “do science.”

Velo excitedly shared his teacher’s name and talked about the picture he was drawing. He explained that he was drawing a picture of himself at school and pointed out that he made sure to draw a brain in his head.

“He just opened that door and was grinning ear to ear,” Utley said.

“I’m trying to draw a lunchbox,” she said, adding that she’s excited about kindergarten because her class is “going to do fun stuff.”

“It’s going to be fun,” said Madison Fontaine through gulps of applesauce.

Utley said her favorite part of the first day of school is “just seeing their smiles come in for the first time.”

“It melts your heart,” she said.

Utley said she didn’t sleep Sunday night because she was afraid she’d forgotten something.

The second-year teacher said she has “a lot of new ideas for reading.”

She hopes those new ideas will “help them (her students) achieve,” she said.

But success in kindergarten isn’t just about learning the ABCs, Utley started from ground zero Monday morning as she went over kindergarten basics like walking in line and how voices in the hallway must be at a “level zero.”

Elsewhere on the kindergarten hall, other teachers taught their students to sit “crisscross applesauce” and the right procedures for using the bathroom and washing their hands.

“The first day of school was fantastic,” said South Rowan High School Principal Kelly Withers, adding that 85 percent of the students’ laptops have already been deployed.

That’s exciting because it means “our instruction can get started,” she said.

“Our teachers have been so organized – so prepared,” she said. “The teamwork was obvious.”

Lentz said that her staff’s goal this year is to focus on building relationships with the students.

“But the biggest thing in place is the climate and the culture piece,” she said.

They’re doing that by establishing “family circle time,” where students begin and end their days with the same group of teachers and students

Lentz said that “when you get the culture right,” increased scores and productivity fall into place.

By Deirdre Parker Smith deirdre.smith@salisburypost.com School has started, vacations are mostly over and you have 30 minutes or less to... read more